Co-produced by Forrest Films and ESX Entertainment, movie centers on the world of the Lucas Oil Off Road Racing Series.

Racing movies, good and bad, have been made about Formula 1, sports cars, stock cars and Indy cars; now it’s short course off road racing’s turn with the release of “DIRT” by Warner Brothers Home Entertainment.

With Forrest Lucas as executive producer, it’s naturally focused on the Lucas Oil Off Road Racing Series. The racers, their trucks and the tracks that the series competes on feature heavily in the film. Carl Renezeder, Rob MacCachren, Doug Fortin and Kyle LeDuc are among those making on-camera appearances, with the trucks of nearly every Pro 2 and Pro 4 racer circa 2015-’16 shown at some point.

Indeed the vast majority of the racing action was not filmed specifically for the movie, but rather taken from Lucas Oil Production Studios footage of races, both external and in-car. The stunt driving is, for the most part, done by the racers during actual races. Even the announcers that fans would hear at the track or on television, specifically Dave Arnold and Ken Stout, are featured in the race call. As such, there is a strong sense of authenticity.

But, to quote Ali Afshar, one of the producers along with Christina Moore – who also plays wife of former-racer-turned-team owner Rick Radden in the movie – they “Hollywoodized it a little bit.” 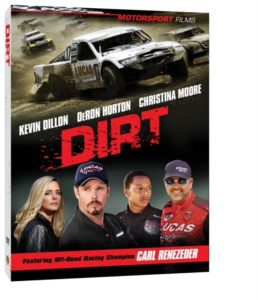 The story involves Radden (Kevin Dillon), who is trying to make a go of it as a team owner, and a young car thief named Dez Truss (DeRon Horton). Truss is given one last chance to turn his life around, and Radden takes him in and gives him a job working on the crew. When the regular driver is unavailable, Truss, who had some experience in karts, gets the chance to pilot the Pro 4 truck. This being a Hollywood story, one might have a pretty good idea how the whole thing turns out after a few plot twists and turns.

As an aside, I am a motorsports journalist; I am not a movie critic. So I’m hardly qualified to comment on plotlines, directing or acting (although I would suggest the writers and photographers who cover the sport should have been featured a bit just to make the experience a bit more complete). But I can be a fair judge of authenticity. And for motorsports fans and participants, that’s usually a chief point of concern given the history of featuring racing in film.

That said, because the racing featured in the movie is footage of actual competition, the racing action is about as true-to-life as it gets. The noise, the power, the beating the drivers take, the banging and, yes, even the crashing is presented as it happens in LOORRS races. Racing movies tend to feature over-the-top, sometimes absurd crashes, such as in one movie based on a now-defunct open-wheel series that we might mention. In short course off road racing, the actual wrecks can be borderline ridiculous, such as one truck landing on top of another off a jump, so there’s no need to exaggerate.

“It actually is a very good representation of the sport,” says Bob Patison, Lucas Oil Products executive vice president and president of MAVTV and LucasOilRacing.tv. “What they did was take actual race footage from our races and inserted it into the movie, and they did an outstanding job with it, so it’s actual race footage with the off road series in full swing.”

Paddock scenes were filmed in the pits at Lake Elsinore Motorsports Park. The writers, producers, director and writers observed the sport firsthand.

“Not only did we go to the actual tracks, the real racers are actors in this movie,” says Afshar. “Carl Renezeder, MacCachren, LeDuc … you’ve got these real guys. I think we nailed it. This isn’t way out there, stretched, fast-and-furious; this is real-life racing, stuff that could happen. We Hollywoodized it a little bit, but it’s stuff that really can happen. We wanted to keep that, because we want to expand the sport. We want people to know about this really fun, exciting, short course racing. It’s a sport that I think a lot of Americans that don’t know about it would like.”

Things do get stretched a bit when a kid, whose previous driving experience consisted of karts on asphalt and outrunning the police, gets into a Pro 4 and after a few laps is turning times within a few seconds of the pros. But it does have the potential to lure in new fans. Dillon, whose primary claim to fame is the HBO series “Entourage,” says he’s one of those.

“I didn’t know the sport beforehand, so it’s new to me. But I felt like it’s a really nice story. I love the characters; it’s got lots of heart,” he says. “And I really think we captured what it’s like to be in the racing world. We had access to everything, so that really helped. I fell like we really captured it and I personally love the sport now.”

He adds, though, that unlike some in his profession who appeared in racing movies and went on to compete themselves, he doesn’t think he has the fortitude despite his love of muscle cars and going fast.

There are aspects of the film, however, where the junction of reality and fiction get fuzzy, and enthusiasts will certainly take notice. These include one track standing in for another; footage from multiple tracks being used in what is supposed to be a single race scene; one tire brand on a truck that carries signage of another, and a Pro Lite crash in the middle of a Pro 4 race. But these are things that casual fans or those unfamiliar with the sport won’t likely notice.

The same is true when the talk gets, er…”technical.” That’s in quotes because this is a movie for the masses, and talk of setup and the mechanicals of a Pro 4 race truck are very generic. You’re not going to hear discussions of bypass shocks, sprags or underdrives. That’s not necessarily a bad thing, but purists will cringe and should be prepared.

“DIRT” is, in essence, a fairly typical Hollywood feel-good film. The fact that it’s built around short course off road racing should appeal to fans, and perhaps create some new ones. There’s a scene when Truss, upon actually seeing the trucks race for the first time, is absolutely floored by the sight – the same reaction a lot of now die-hard fans had. If this movie exposes the sport to people who have never seen it and they develop an appreciation for it, then mission accomplished.

“DIRT” is available now for digital download on a variety of platforms, including iTunes and Amazon. It will be released on DVD on March 20.