'When you're doing well, people get motivated' - Kanaan

'When you're doing well, people get motivated' - Kanaan

Tony Kanaan believes that AJ Foyt Racing has all the pieces in place to move up the Verizon IndyCar grid, although he cautions that it will take some time before the team is in a position to deliver upon its potential.

The Brazilian veteran joined Foyt at a time when both parties are looking for a reset: Kanaan finished a disappointing 10th in his final season with Ganassi last year, while Carlos Munoz’s 16th was the highest a Foyt driver had achieved in the standings since Takuma Sato’s 14th in 2015.

In Kanaan and promising rookie Matheus Leist, Foyt goes into 2018 with an all-new driver line-up supported by a reinforced crew, some of whom followed Kanaan across from CGR. Encouraging pace from both cars at the recent Phoenix test provided a morale boost, and Kanaan says that better is yet to come.

“I have no doubt we are going to be competitive,” he told RACER. “I’m not saying we’re going to go and kick ass right away, but in racing, when you’re doing well, people get motivated, and that test was great for the guys, great for the team. We’ve been working really hard to build something that is up to A.J.’s standards. It’s been a lot of hard work, a lot of nights, a lot of time in the shop in Indianapolis just trying to get back to basics.

“The first thing is to turn the team around. A.J. knows better than anybody that before you say ‘we’ve got to go and win,’ he knows exactly what we need to do to achieve that. My commitment to him was, let’s build this team as fast as we can, because racing doesn’t wait. [We’ll] concentrate on our strengths in the first year; the second year, we go for everything. That’s what we’re trying to do.” 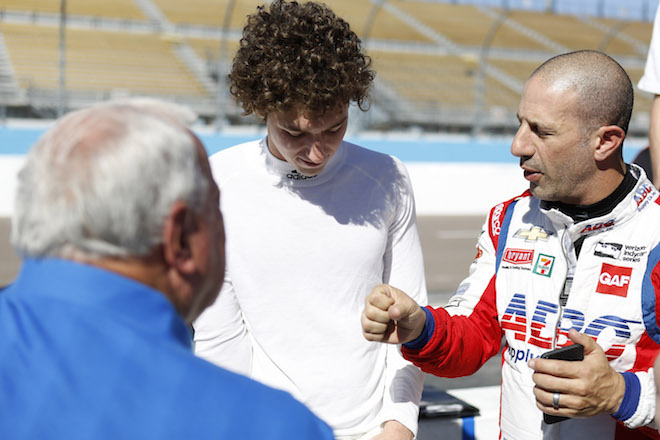 Kanaan was also full of praise for Leist, who arrives into the series on the back of three Indy Lights wins last season – including the Freedom 100 at Indianapolis Motor Speedway – and claimed fastest rookie honors at Phoenix.

“He’s fast,” asserted Kanaan. “He’s really fast. He’s young and has a lot of potential, and I think between A.J. and I, he is going to get a lot of the information he needs to get up to speed quickly. He has the speed, now we just need to fill it in with some experience.

“But when Larry [Foyt, team president] was talking to me about who I wanted as a teammate, I said ‘It’s not up to me to choose, but I think you need to look at the longevity of your team. I don’t think it would be a good thing to get two guys my age because then you need to do this again a few years down the road. Think about getting somebody that’s young that I can help, and that can fire me up. They’re going to want to beat me so bad, that keeps me on my toes, and I can help to bring the team up’. And I think they chose the right guy.”

Kanaan’s praise was echoed by A.J. himself, who also senses that his team has an opportunity to turn a corner.

“[Leist] is doing a great job,” he told RACER. “He was quick in California [Sonoma], quick in Sebring, and quick in Phoenix. What else can you ask for?

“I think we have a good team. We’ve just got to make it work for race day. That’s the important part. But I’m happy with all our guys. We’ve got good mechanics, good engineers, we’ve got a rookie driver, and we’ve got Tony to lead him. So we’re working at it. We’ve got some good, good people, and when you go racing, you never know what’s going to happen.”