Max Verstappen believes Red Bull is likely to show its pace compared to Mercedes and Ferrari during the second test after a difficult start to pre-season.

Mercedes completed the second-highest mileage during a weather-affected week at the Circuit de Barcelona-Catalunya, with Ferrari just eight laps behind last season’s constructors’ champions in third. They were also the top two teams in terms of fastest laps, with Lewis Hamilton’s 1m19.333s on medium tires leaving him just over 0.3s clear of Sebastian Vettel on softs.

Red Bull managed nearly 100 fewer laps than Mercedes during the opening week, but when asked if he feels the RB14 is in a better place than last year’s car despite the times and mileage, Verstappen replied: “Yes, but looking at lap times now doesn’t make sense.

“Anyway, this track with the new surface, it takes a long time before you actually get a lap time out of it. And we have only done runs of like two laps. So I am not too worried yet. You know that Mercedes and Ferrari are really strong anyway. But I am quite happy with the car so far, so the second week maybe we will show a bit more how we are comparing against the rest of the teams.”

Verstappen insists he has a good feeling in the car even if performance has been hard to gauge due to cold conditions during the opening week of testing.

“Yes, [the feeling] is positive, but we didn’t do any proper running. Checking a lot of things – the data, comparing it to the wind tunnel – and sometimes you need to really work on that, especially when the conditions are like this.

“I am all right, and I am positive. Maybe it does not seem to be like that on the time sheets, but also the tarmac here, you need a lot of laps before you get a lap time out of it. [On Thursday] we didn’t do that.” 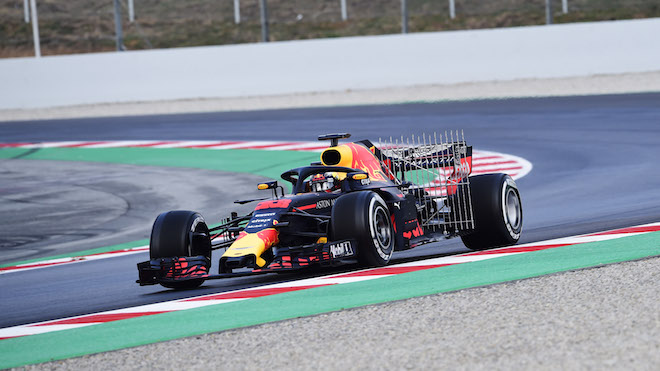 Explaining his lack of running on the final day of the test – when he managed just 35 laps – Verstappen says early delays were planned before a gearbox issue after a spin ended running prematurely.

“We didn’t want to run because when it was that wet it didn’t really make sense for us. Then when the track was drying out a bit, of course we went out on the intermediates, and everything seemed to work quite well. And then we did our program, just checking the car on the slick tires initially, just some short runs.

“When we wanted to go for some longer runs we had a little hiccup. We had a leak, so we were just checking the whole car, and everything was all right after that. It took a bit longer than expected, but once we went out again I had a little moment in Turn 12, and then, reversing, something happened with the gearbox, which we still need to investigate.

“But these things happen, and anyway the conditions this week were not great, so hopefully next week will be a bit more sunny.”