In RACER Magazine: Losing It

In RACER Magazine: Losing It

For the fourth consecutive year, Mercedes was both the Formula 1 world champion constructor and provider of the car of the world champion driver, in this case Lewis Hamilton.

But 2017 was different. Sure, the ultimate outcome was the same, but Mercedes won only through the dogged efforts of a tough, battle-hardened group, rather than the quicksilver magic of before – when all opposition was crushed. This year Ferrari actually had more of the magic stuff, but proved just a little flakier in operation, got a little flustered at the multiple simultaneous demands of a title fight, felt the pressure, and allowed it to seep into its organization and its lead driver Sebastian Vettel. Ferrari lost this title more than Mercedes won it – and the numbers show this very clearly.

Ferrari’s reaction to the new 2017 technical regulations bore the hallmark creativity and aggressive rule interpretation of Maranello’s golden Schumacher years – something not really seen since that time. The common denominator seems to be Rory Byrne, who led the concept of 2017’s SF70H that the various heads of technical departments worked to.

The SF70H had a novel and unique resolution to the new 75-degree sweep-back regulation around the sidepods, one that allowed the car to combine compact dimensions with a lot of downforce. It had a trick floor with flexibility points that made it tunable to the track, and a trick fluidic switch that determined whether the front axle was blown (for downforce) or unblown (for drag reduction) according to a speed threshold.

The engine department worked a very cheeky interpretation of the restrictions on oil burn. Many of these tricks were reined in as the FIA became aware of them, but the light, compact, high-rake SF70H was right in concept – and could invariably be tuned back to competitiveness each time. Hot tracks or cold, soft tires or hard, fast corners or slow, it was always fast.

But it was a fleet-footed car operated by a sometime leaden, unresponsive team. The exact opposite of Mercedes, in fact. The Brackley-based team’s response to the new wider bodies and tires of 2017 was the long, heavy W08 that followed the team’s well-established – but increasingly out on a limb – low-rake aero concept. The regulated wider bodies – specifically the wider floors they brought – effectively legislated against low-rake, the downforce punishment of which was greater than the reward of its lower drag. Hence more wheelbase for the W08 to give more downforce-inducing floor area. 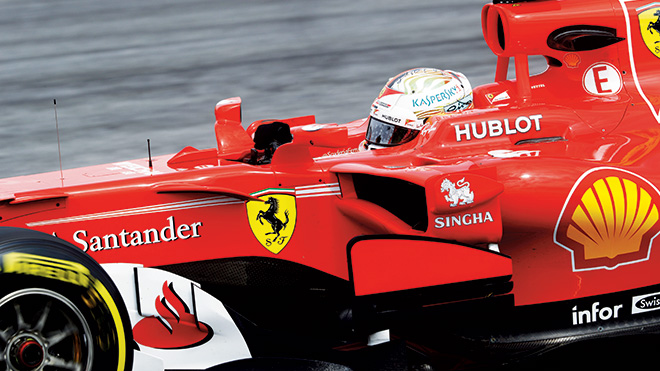 But low rake was the concept Mercedes had been following since 2014, when Mike Elliot joined as head of aero from Lotus. Switching to a new concept always involves losses that take time to claw back – and Mercedes chose not to, believing it had a technical weapon that would overcome the downsides of low-rake: an asymmetrically-valved heave spring. It kept the floor low to the ground even after the brakes had been released, rising up only slowly and thereby giving much of the effect of high rake.

Mercedes had spent years developing it, had used it a few times in 2016, and went all out and based the W08’s concept around it for 2017. Then it was banned on the eve of the season…

What it left was a car that still had great aero efficiency, but had a mismatch in traits between low- and high-speed corners, with a big rearward migration of the aero center of pressure as speeds lowered. If a track had a big spread of corner speeds, the Merc was in trouble. If the track was predominantly about how much downforce could be retained on slow corners, it was off the pace. If there was a tire temperature concern, the Merc would always find it.