Fernando Alonso played down a wheel nut failure that limited McLaren’s running on the first day of testing, saying there is “huge potential” for the team.

Entering the final corner on his sixth lap, Alonso lost control as the right-rear wheel worked loose, pitching the car into the gravel. With a wheel nut failure given as the cause, McLaren spent the majority of the morning investigating the issue before managing four further laps before lunch, but additional mileage in the afternoon – in both dry and wet conditions – left Alonso much more optimistic after ending the day seventh-fastest overall.

“So far, so good,” Alonso said of McLaren’s start. “Obviously very early days but the car was running fine, the engine was running fine. I know a lot of people from Renault from my past, so 80 percent of the guys in the garage, I know them.

“I know how hard they work, and how much attention they pay to driveability, to performance of the engine, so every nice was a good chat with them – both at the filming day and also here. Everything is running very smooth, quite good.

“A few things that we are trying to change and trying to adapt, but so far – on the engine side especially – extremely happy. I think there is a huge potential on the McLaren-Renault team.”

Asked about the wheel nut issue, Alonso said his first thought was that it would make for good headlines for the media. 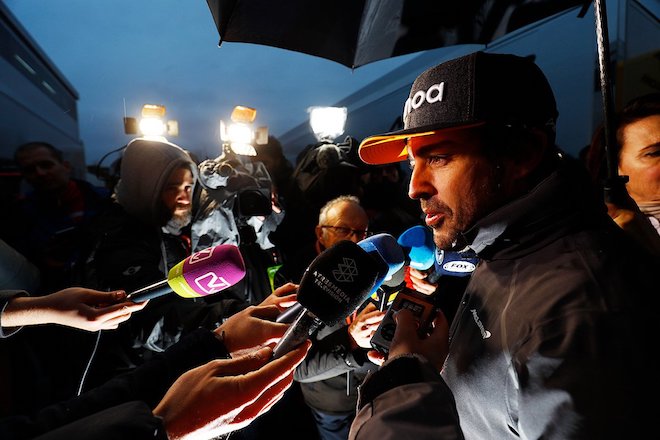 “I thought exactly that because this is a very, very small problem, but very graphic, very obvious. A car in the gravel makes a big thing, but there are six teams in the garage with the door closed, with the car in pieces – but there is no picture of that. So there are a lot of teams in trouble, big trouble, and for us with a wheel nut it will make the thing of the day. So I thought about all of you!”

Alonso’s fastest time on Monday was deleted at the end of the session as he skipped the final chicane in order to get ahead of another car, demoting him from fifth originally to seventh.