Above: Dave Calabro, IMS track announcer and WTHR’s sports director, with the green flag for the 102nd running of the Indianapolis 500.

With less than 100 days to go until the 2018 Indianapolis 500, the green flag is in the midst of its inaugural worldwide “Green Flag Relay,” visiting unique settings and events leading up to race day.

The flag’s first stop was the NASDAQ stock exchange on Jan. 23, where Hulman Motorsports Senior Vice President of Events Allison Melangton closed the markets for the day, followed by a visit to Times Square. 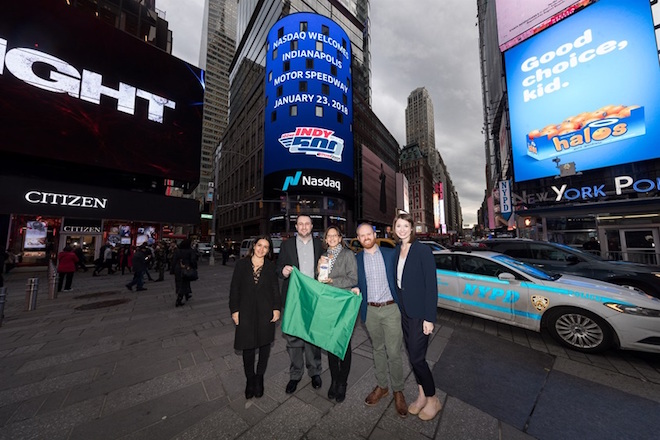 The #Indy500 and the @Indy500SnakePit took center stage today in Times Square!

A few days ago, the green flag made its way to Pyeongchang, South Korea for the Winter Olympics.

The #Indy500 Green Flag made a pit stop in Korea to see the world’s greatest athletes!

Thanks to our friends at @Bridgestone & @FirestoneTires for joining in on the #GreenFlagRelay.

“For everyone who loves race day, the green flag has come to symbolize high speeds, breathtaking competition, iconic tradition and pageantry, and so much more,” said Indianapolis Motor Speedway President Doug Boles. “Fans are going to enjoy seeing the flag embraced at so many meaningful venues and events this year as the countdown to the Indy 500 continues.”

Fans can follow the flag’s adventures via www.IMS.com/GreenFlagRelay, which will feature an interactive map with pictures, video and more. On social media, the campaign can be tracked using the hashtag #GreenFlagRelay.