“Daytona was a huge event to try and go do from Europe with two cars for the first time, and what felt like the spotlight of the motorsport world on us,” Dean said Thursday at Sebring International Raceway in a two-day test to prepare for next month’s Mobil 1 Twelve Hours of Sebring Presented by Advance Auto Parts. “It was quite a pressurized situation, and I thought by the time we got to the race, we were quite competitive.”

The pressure came primarily from the fact that two-time Formula 1 World Champion Fernando Alonso was part of the team’s driver lineup in the No. 23 United Autosports Ligier LMP2 car alongside youngsters Lando Norris and Phil Hanson. But it was the team’s other car, the No. 32 Ligier shared by Will Owen, Paul Di Resta, Hugo de Sadeleer and Bruno Senna, that was the top performer, finishing just off the podium in fourth place.

It was a strong start for the team in its first WeatherTech Championship race. But the veteran team that regularly competes in the European Le Mans Series would have liked an even better result.

“We were a little bit disappointed in the end, even though we finished fourth because I think with three hours to go we sat in third place and the two Cadillacs were looking like they were struggling, we felt like we had an opportunity that 24-hour races can give you,” Dean said. “But everybody’s got a story, so we came out of there with a fourth place.”

Even before that fourth-place result, the team announced plans to field the No. 32 Ligier in this season’s remaining three races of the Tequila Patrón North American Endurance Cup season, which reaches its halfway point next month in Sebring.

On Thursday, Hanson and Di Resta were busy familiarizing themselves with the quirky, 3.74-mile Sebring circuit alongside Alex Brundle, who the team brought in for this week’s test in place of Senna, who will drive for the team in the Twelve Hours but was battling an illness this week.

“Bruno couldn’t travel, he wasn’t well enough, and there was just no point in him getting on a plane and being ill here,” Dean said. “He knows the track. Of the three drivers we’ve got, he’s the one who needed the least laps around here.

“We’re new as a team here to Sebring, and the two drivers then that we’re going to run with – which is Phil Hanson, who just turned 18, and Paul Di Resta, who, while massively experienced, he’s not experienced in LMP2, Daytona was his first experience.

“We’ve got a relationship with Alex, we ran him in LMP3, he won the European championship with us, he’s been here before, he knows the team really well, and we thought it would be sensible to have somebody as a reference here. Alex was available, so he’s here at the test to help us.”

What also has been helpful to the team is its alliance with IndyCar powerhouse Andretti Autosport. The Indianapolis-based Andretti team has provided significant operational assistance, and the team also secured some temporary workspace in Florida as it prepares for the Twelve Hours.

Dean said the team would keep this No. 32 Ligier in the U.S. for the remainder of the year for the Patrón Endurance Cup rounds as it fields two other Ligiers in the ELMS.

“We feel a little bit more organized, we’ve got our own truck now, and we’ve got a little base here, and Andretti have been helping us out an awful lot, so our little collaboration or alliance with Andretti has certainly steadied the ship a little bit for us and helped us,” Dean said. “We’re excited to do these remaining races, and now that we’ve got Daytona experience with us, it’s definitely going to help us do a much better job in the approach for Sebring, Watkins Glen and Petit.”

Among the myriad of things WeatherTech Championship teams are working on during the two-day test at Sebring – in the Prototype and GT Daytona (GTD) class – are brand-new tires from Continental Tire. No.44 Magnus Racing Audi R8 LMS driver Andy Lally offered his initial feedback on the new rubber on Thursday afternoon.

“We’ve got a new tire this year from Continental,” he said. “They’ve just introduced not only a new construction but a new compound, so all the teams are going through the process of feeling out what air pressure it likes, what camber it likes, what toe it likes and the combination of all three of those put together.

“Basically, we’re all going through sweeps right now and feeling things out. What does the tire feel like when you’re in qualifying mode versus full-fuel mode? There are all sorts of stuff when you get such a change like what we’ve got here. This is a relatively big change for the GT cars. Maybe for the Prototypes, it’s not as big a change, but for the GT3 cars, it’s quite a different feel on the platform. We’re just going through that.

“It’s the first day and everybody’s fairly calm about it now. I’d imagine midway through tomorrow, you’re going to start to see guys throwing down and really trying to squeeze every last hundredth out of it. The Audi feels pretty balanced right now with it, so we’re pretty happy, handling-wise, how we’ve been able to integrate this tire and evolve the past setups that we’ve had into what we’ve got today.”

Lally drove an Acura NSX GT3 last season for Michael Shank Racing but has rejoined his previous team, Magnus Racing, this year when it returned to the WeatherTech Championship after a one-year hiatus. It hasn’t taken long for the veteran sports car racer to get reacquainted.

“I am 1,000 percent back into Magnus Racing mode,” he said. “Daytona was a homecoming, but in reality, I really barely left. Magnus Racing went to a different series last year, but I was still with them at those races, working in a different manner, not driving but helping John out a little bit where I could.

“It’s like I never left. We got right back in the swing of things in the very first test after the 2017 season ended, and now we’re just trying to get back up to speed here at Sebring and see what we’ve got against all these other teams.”

Numbers align for Auberlen as he prepares for 25th Sebring race in No.25 BMW 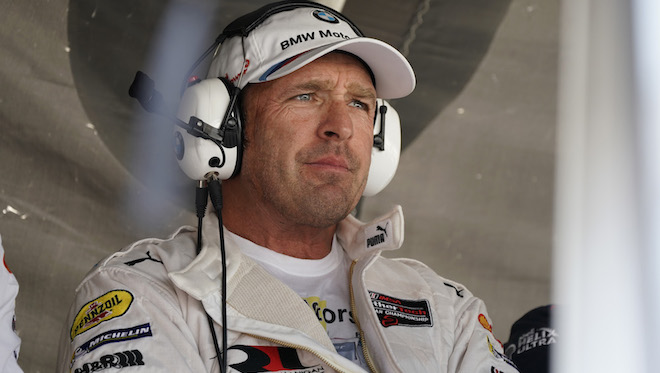 IMSA WeatherTech SportsCar Championship driver Bill Auberlen knows what it takes to win, 58 times to be exact, a record which stands as the second most by a driver in IMSA history and just two behind all-time leader Scott Pruett.

However, some of those wins are a little sweeter than most. Auberlen’s most recent victory at the 2017 Motul Petit Le Mans in the GT Le Mans (GTLM) class came in his 400th career start with BMW, and in 1995, Auberlen captured his first Mobil 1 Twelve Hours of Sebring Presented by Advance Auto Parts victory with a unique twist.

“What’s really neat about this is my dad (Gary Auberlen) won Sebring in 1985, the Twelve Hours, and I won it 10 years after that in 1995 and again in ’97 and ’98,” Auberlen recalled. “So, I’ve had success here, but it’s something that ties my dad and me together. My dad comes to this race every year with me.”

And at the next Mobil 1 Twelve Hours of Sebring Presented by Advance Auto Parts, set for Saturday, March 17, Auberlen hopes to make the stars align again, driving the No. 25 BMW Team RLL BMW M8 GTLM in his 25th start at the iconic 12-hour endurance event at Sebring International Raceway.

“Of any race that you’d want to do 25 times, Sebring is the one,” said Auberlen. “It’s the most historical race we go to in the United States and it’s probably the most fun for me to drive. It’s the most challenging.”

While the three-time IMSA champion is going for his fourth victory at Sebring, Auberlen says he has learned more from the losses than the wins.

“Obviously the wins are fantastic,” he said. “The first win was amazing. It was with Alex Job in a Porsche and then came BMW. Some of the defeats are challenging. The wins are easy to take as a human because you don’t have to do much. It’s when something goes wrong, and you have a defeat, that defines you and how you respond. I’ve had plenty of times where I’ve yet to understand myself, dig deeper, and learn a lot about myself.”

For 2018, Auberlen has transitioned from full-time status in the WeatherTech Championship to a new role as a BMW North America Brand Ambassador and four-round Tequila Patrón North American Endurance Cup driver for his former team. With his eyes still set on becoming the winningest driver in IMSA history, Auberlen truly believes in the BMW M8, which is new for the 2018 season, and his team.