'We're not ready' for an American driver - Haas

'We're not ready' for an American driver - Haas

Gene Haas believes his Formula 1 team is not yet good enough for an American driver as it is still lacking the experience needed to develop one.

The lack of American drivers in F1 was a hot topic over the winter as Haas team principal Guenther Steiner suggested none are ready to drive for the American team, leading to a strong response from a number of IndyCar drivers. After McLaren boss Zak Brown recently named 2017 IndyCar champion Josef Newgarden as someone he would put in an F1 car, Haas himself believes Steiner’s message was misunderstood and claims it is the team that needs to improve in order to accommodate a driver from the U.S.

“Well, I’m pretty sure I know where that talk came from,” Haas said when asked about the topic of American drivers. “Guenther Steiner, our team principal, was asked about having an American driver in Formula 1 and, more specifically, with Haas F1 Team. He responded by saying something to the effect that it wasn’t at the top of our priority list, and things kind of took off in a bunch of different directions as people made a bunch of assumptions. 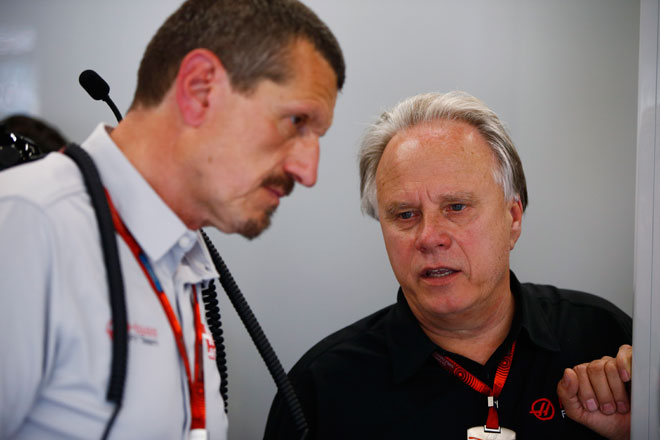 “The fact is that we’re still learning here in Formula 1, and bringing on a driver who needs to learn about Formula 1 probably isn’t the best thing for us or them. I felt like there were times last year where our drivers were better than our cars. So, we need to step up, but we know where we need to improve thanks in large part to the experience of our drivers.

“We’re not saying no to having an American driver, but the reality is that of the American drivers who have a superlicense and could actually compete in F1, they should really be with a team that can serve as their benchmark rather than the other way around.”

Haas (pictured at right, above, with Steiner) added that his team currently needs drivers with F1 experience to help identify weaknesses, meaning at this stage an American driver without a significant number of grand prix starts wouldn’t be an ideal candidate for a race seat.

“Now, we fully expect to eventually be in that position – ideally, sooner rather than later – but this is only our third year and we need to improve in a variety of areas, and Romain Grosjean and Kevin Magnussen are playing a big part in that improvement because of their experience.

“They help us, rather quickly, determine if the course we’re taking is a proper one or if we need to re-think our approach. That experience is invaluable as we look to become a team that can eventually challenge for podiums instead of just points.

“This debate about American drivers really isn’t a debate. I believe in American drivers – my NASCAR team is full of them, and we’ve won a lot of races and championships. Obviously, the discipline is different, but sure, there are competent American drivers who can compete in Formula 1. But we’re not ready for that yet, and with the limited amount of testing teams have, getting anyone up to speed who hasn’t already been a part of a development program would be hard. I think that’s the point Guenther was trying to make.”