Renger van der Zande saved his best for the final seconds of Thursday’s qualifying, turning a track record lap of 1m36.083s at the checkered flag in the Wayne Taylor Racing Cadillac DPi-V.R to capture the pole for the 56th Rolex 24 At Daytona. He nipped Acura Team Penske’s Helio Castroneves by a mere .007s.

Van der Zande is the new driver for the No. 10 Konica Minolta Cadillac, 2017 winner of the Rolex 24. He will co-drive with Jordan Taylor and Ryan Hunter-Reay.

“This is just qualifying, but it’s nice to be on the pole here,” van der Zande said. “I didn’t think we could take the pole, but I’m super happy to do it. It’s a good start for the new job. When they told me I was on the pole, I was over the moon.”

Van der Zande takes over for Ricky Taylor on the Taylor Racing team. Ironically, van der Zande’s pole relegates Ricky Taylor to the outside of the front row in the No.7 Acura ARX05 he shares with Castroneves and Graham Rahal.

“We didn’t think the pole was within our grasp, but this team works and works and works,” car owner Wayne Taylor said. “Renger had an amazing lap, but it only counts on Sunday.”

Filipe Albuquerque was third in the No. 5 Mustang Sampling Cadillac, 1m36.194s, followed by Pato O’Ward, who ran a final lap of 1m36.318s in the No.38 Performance Tech Motorsports ORECA 07-Gibson.

“I think it was a good session for us,” Alonso said. “It was nice finally to do some laps in the car with no traffic. In free practice, there was traffic and a lot of things going on. In Prototype qualify, you can put some laps together and get used to the car. I was happy with the laps, and I was happy with the balance. We still need to improve a little bit to get a little more speed, but in general, I think we did a good job.”

Two pole contenders had brief off-track excursions near the end of the 15-minute session. Tristan Vautier will start fifth in the No. 90 Spirit of Daytona Cadillac, while Felipe Nasr will be seventh in the No. 31 Whelen Engineering Cadillac.

Nicolas Lapierre tagged the tire barrier in the West Horseshoe. While he was able to continue, he pulled off with left-front suspension damage to the No. 22 Tequila Patron ESM Onroak Nissan DPi. 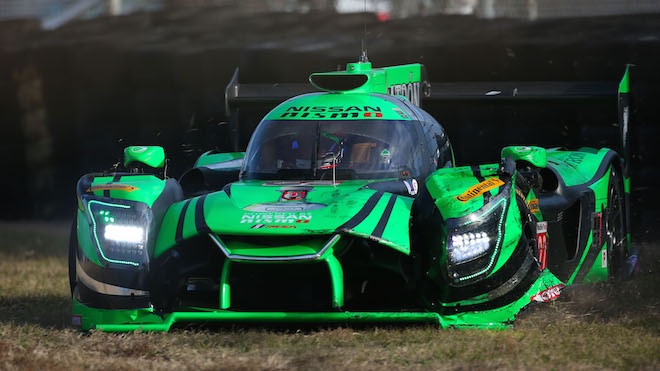 “This is the first pole for me here,” Magnussen said. “I’m a little bit surprised and super, super happy. I got a good lap and a good tow from my teammate Ollie [Gavin]. For qualifying, you put on new tires and just go for it. The race is a different ballgame. We’ll see how our pace compares to everyone, see how the race goes and hope to go for the win.”