IMSA GTD racer and 2017 Bob Akin Award winner Ben Keating will contest the 2018 Le Mans 24 Hours in a Ferrari 488 GTE run by Risi Competizione in the GTE Am class.

Keating earned an automatic invitation to the race by winning the 2017 Bob Akin Award for outstanding performance by an non-Pro driver in the GTD class of the IMSA Weathertech Sportscar Championship.

“The fit here was a very good one,” Mayer said. “I am a car dealer based principally in Houston, and accepting the fact that Mercedes AMG, which we race in IMSA, is not an option for Le Mans, working with Guiseppe Risi, who is also a car dealer and highly accomplished racer based in Houston, made perfect sense.

“Risi Competizione have had huge success at the Le Mans 24 Hours with three wins and lot of other podium finishes. They know how to get the job done. I’m delighted to be racing with them.” 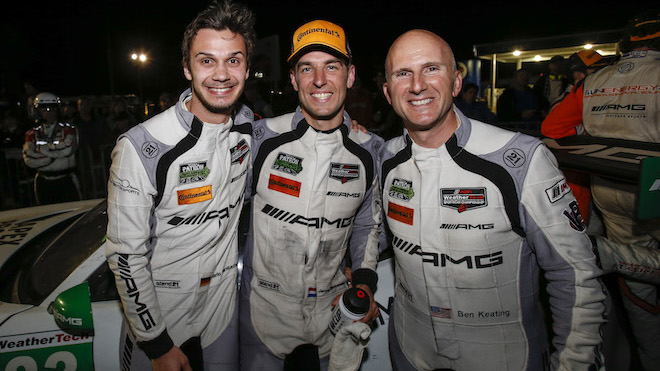 Keating will be joined at Le Mans by five-year IMSA driving partner Jeroen Bleekemolen with a Silver-ranked third driver to be announced in the coming days. Keating confirmed to RACER that the pool of drivers under consideration will encompass both his own IMSA contact book and others suggested by Risi from within the Ferrari racing family.

“The key is to put together a crew that can finish and be competitive, and the field is a very strong one,” Keating said. “We’ve been discussing just a few minutes ago potential dates to test the car here in the USA before the test day in June ahead of race week.”

The 2018 race will be Keating’s fourth start at Le Mans after previously contesting the race in the Viper GTS-R in 2015, a Murphy Prototypes-entered ORECA 03-R in 2016 and in 2017 with his own Riley Multimatic Mk30 Gibson.