INSIGHT: Is McLaren ready to win?

INSIGHT: Is McLaren ready to win?

‘All things being equal’ is a term rarely used in Formula 1. The sport is, by its very nature, unequal. Only a maximum of two drivers have the same machinery, and even then set-ups can differ. But sometimes, the sport is less equal than others.

As the exclusive Honda partner for the past three years, McLaren has been very much in its own boat. With no other Honda-powered team against which to benchmark itself, McLaren has been a unique case that – at the start of 2015 at least – seemingly had the potential to rise to the front of the grid, or flounder at the back.

More often than not, it was the latter. Honda struggled for both performance and reliability, and the relationship eventually broke down in its third year; the starting point with a new power unit concept was deemed too low.

The switch to Renault power for this season onwards has been hailed as a watershed moment for the team. But as I’ve previously written, it’s a move that leaves McLaren nowhere to hide. With Red Bull and Renault as its most direct competitors, the true standing of the team will be laid bare in 2018.

So, is this a team that has recovered from its 2013 decline and just hasn’t been able to show it? Or is McLaren facing a similar fate to Williams after such a long spell away from the front?

“I think our people are our biggest strength,” McLaren’s executive director Zak Brown tells RACER. “We’re still a world champion team. Even though we haven’t had those on-track successes here for a while, the people here are perfectly capable of winning and winning championships.

“I think people might not see how badly we want success; how hungry we are. It’s been humbling, which is maybe not a word that you would have associated McLaren with over the years.

“So we’re hungry, we want to earn it, we want to race hard and I think those are things that you can feel when you’re in the building when you go and walk the factory floor, and maybe it doesn’t come across on television where these guys are at. We’re ready.” 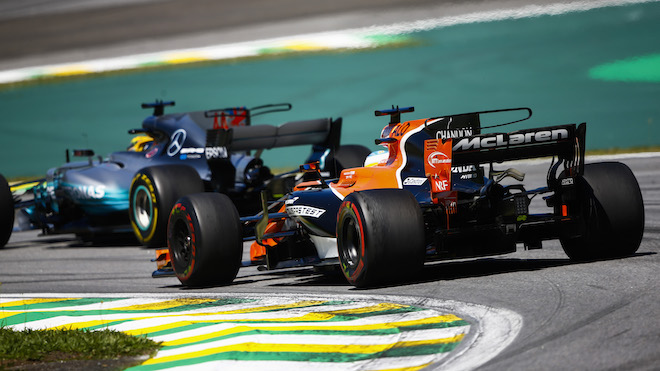 As late-morning winter light floods Brown’s office in the McLaren Technology Center, the words “we’re ready” close off a number of answers during our interview. There’s an eagerness to go grand prix racing again, even before the Californian has had time to tackle Daytona with his United Autosports team featuring Fernando Alonso and Lando Norris.

The reason for that impatience comes from McLaren’s knowledge of where it would have been with a Renault power unit last year, which impacts on 2018 expectations.

“You can quite easily look with GPS, and all the teams can do the same thing,” Brown says. “In 2017 – because next season nobody knows – if we had the Renault powerplant in there we would have been there or thereabouts with Red Bull. Some races ahead of them, some races behind them, but we would have been around there.

“You ultimately don’t know what the car will do when it speeds up. You can have a general idea, but we’re not working our aero as hard coming into Turn 1 because we’re not coming in at the same top speed, so we know if we would have had X more top speed but that’s all by the engine, and then you don’t know exactly what you’d have done under braking and turn-in because you’d have been working the downforce differently.”

Asked what that does for the goals that he’s set the team for 2018, Brown says: “It gets us excited!

“We want to be on the podium. We think – this isn’t a prediction, this is a desire – we think we’re going to be on the podium this year. And we’d like to think we can get on the top step, but it gets pretty tight at the top of the field there.

“It’s not great for Formula 1 when Force India is fourth in the championship and didn’t even get on the podium. So you kind of have to be a top three team to get on the podium, and then all of the top three had a chance to get on the top step. We like our opportunity, but we don’t think it’s going to be easy and it’s not a foregone conclusion.” 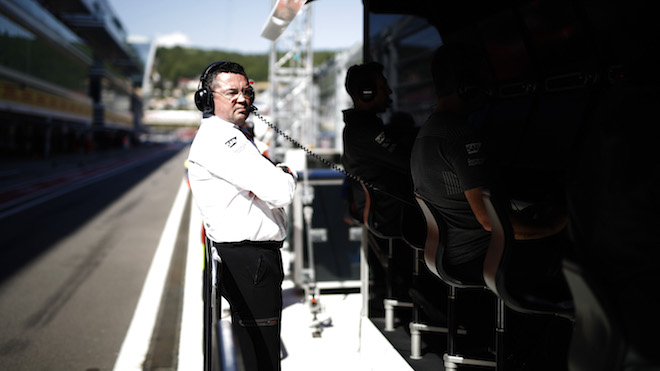 While Brown has obvious enthusiasm that stems from his relatively recent arrival at McLaren, racing director Eric Boullier has been a part of the struggle since moving from a similarly declining Lotus at the start of 2014. Despite only overseeing one race where a McLaren driver has stood on the podium in that time, the Frenchman has no doubts as to the team’s readiness to win again.

“It is in the mindset,” Boullier says. “You rebuild the team, and lots of people have been used to winning in the past with different organizations. So that’s the kind of motivation and adjustment if you want for the company which will be very easy to do.

“They are all competitive, they are all racers and when you have to go to fight for wins you obviously need to be prepared in terms of mindset, set-up, pressure, pitstops… we’ve worked on all of this.

“For example, we parked pitstops for some time because it wasn’t a priority in our position, but if you look at the race in Brazil last year, the fastest team was us. So little by little we are rebuilding everything, under the radar, just to be ready.”

While 2017 was a development race under new regulations, McLaren was still rarely able to compare its progress against other teams. But Boullier is confident his outfit was a match for the top three when it came to improving its car during the season.

“We were definitely one of the best because we caught up,” he says. “The change of regulations helped us to close down a little bit quicker, but I’m pleased with the way we work on the car and develop the car these days at McLaren.

“We changed the whole system and we introduced what we believe is the lightest and most flexible system where we can bring parts every weekend. And the correlation has been great, which is good.”

Therein lies the mystique of McLaren right now. Improvement was clear last season as the team regularly scored points at the end of the year, but simultaneous strides by Honda makes it difficult to pin down who should get the bulk of the credit.

Brown himself insists the majority of the progress came from the chassis. And while he still sees weaknesses within McLaren, the executive director can’t pick out an area – Boullier’s reference to pitstops aside – that could scupper hopes of fighting with Mercedes, Ferrari and Red Bull in 2018. 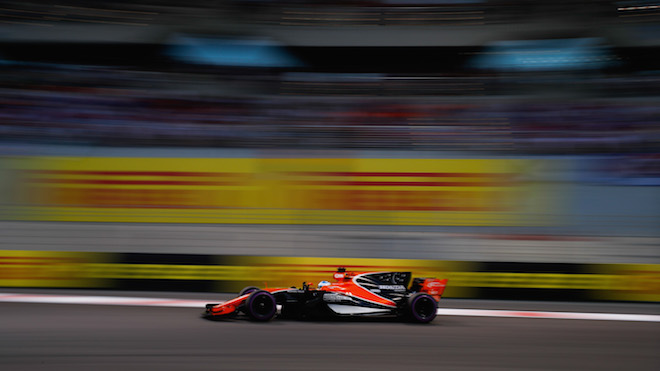 “We need more sponsors, and I’ve got a target on my back for that, given my background,” Brown admits. “Our pitstops are something we have identified. We weren’t strong on pitstops last year if you look at where we were. There’s no reason we can’t be the best. Williams wasn’t the fastest race car but I think they’re the second-best team on pitstops, so we’ve got to address that. And then, everybody just working as a team.

“Probably the areas we need to work on are less grand prix related and are more big organization collaboration between automotive, racing and technology, because they had some similar shareholders, but different shareholders. We’re now one company, so I think the areas where there’s room for improvement is collaboration between the entities, but that’s not something I think fans are going to see on TV.”

The self-confidence within McLaren is almost infectious, but this is a team that has been the master of its own downfall since it last won a race in 2012, initially developing its car poorly and then not continuing a partnership with the dominant power unit supplier in Mercedes. Much has changed in that time – most notably the departure of Ron Dennis after a power struggle at the top – and the most recent changes have substantially raised expectations.

“I think we need to take it one step at a time,” Brown says of the recovery effort. “If we end the year with a handful of podiums – regardless of what step that is – that’s good progress. We need to get back to the front of the field.

“Obviously we want to win just like everybody else, but we’re not going to set goals that potentially you can fall short of. So I think our goal is, let’s get on the podium, and whether it’s for second or third, we’ll see.

“We’re hungry. It’s great when you talk to Eric and the team and you go ‘Do you need anything?’ and they say ‘Nope, we’re good’. So everyone’s ready. Everyone’s ready.”

Brown’s excitement is obvious, and he’s clearly fighting to contain it before the true picture is seen on track this year. There really will be no hiding place, but that’s just how McLaren wants it.