Michelin has become the first company to partner with the new Jaguar I-PACE eTROPHY electric support series, named Thursday as the official tire supplier for all 20 entrants.

Rahal Letterman Lanigan Racing is the only confirmed entrant to date for the production-based electric vehicle race series, which will run in tandem with the start of the fifth Formula E season in December 2018.

Michelin’s supply portfolio includes FIM MotoGP and Moto-e World Cup, the FIA World Rally Championship and the World Endurance Championship. Michelin was the first company to partner with Formula E for its inaugural series in 2014, and in December the company renewed its partnership to serve as FE’s official tire supplier through 2021.

“We have been a partner of Formula E since its inception four seasons ago and are excited to extend our presence in electric motorsport into the Jaguar I-PACE eTROPHY,” said Michelin Motorsport Director Pascal Couasnon. “The series is in its early stages and we look forward to working alongside the Jaguar Racing team in launching the world’s first international championship for production-based electric cars.” 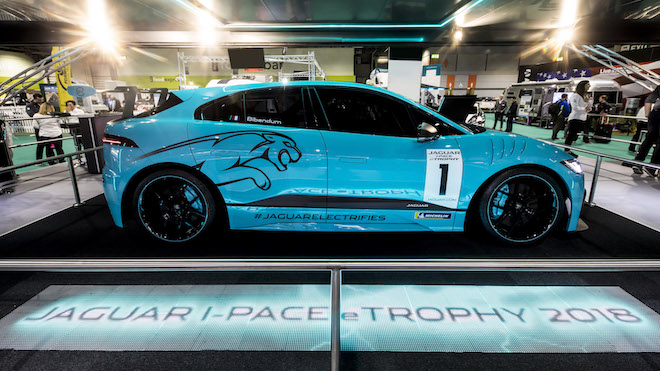 The racecars are based on Jaguar’s first battery electric vehicle, the Jaguar I-PACE, which will go on sale later this year. Jaguar Land Rover Special Vehicle Operations (SVO) in Warwickshire, UK, are building the cars and Jaguar Racing are offering “Arrive and Drive” packages for up to 20 drivers.

“Jaguar Racing are thrilled to have such an established motorsport partner like Michelin joining the Jaguar I-PACE eTROPHY and we’re confident they will help us to deliver a successful and exciting series,” said team director James Barclay. “Since the global announcement in September and the reveal of Rahal Letterman Lanigan Racing as the first team in November 2017 there has continued to be positive interest and we look forward to announcing more partners and teams over the following months.”

The planned schedule for the 10-race championship consists of a practice and qualifying session, followed by a 30-minute race.