Ryan Hunter-Reay is hoping the new universal bodywork that adorns his No. 28 Andretti Autosport Honda will play a part in getting back to Victory Lane.

A quiet 2017 season where the former Verizon IndyCar Series champion went winless could be rectified by the heavy revision to the base Dallara DW12 chassis. A sizable reduction in the maximum downforce available at most tracks – road and street courses, in particular – should favor the Indy 500 winner. With a more dynamic car to drive, one that is rarely happy and stable under braking and corner entry, Hunter-Reay left Sebring on Wednesday buoyed by all he experienced with the UAK18 bodywork.

“It was great to get back in the car. It’s been so long since I’ve been behind the wheel,” he told RACER after watching other teams run for Honda throughout the offseason during manufacturer tests. “Obviously, we’re starting a little bit behind the eight ball, so late in the game; we’re only going to be on track three days on road courses for three days before we actually race in St. Pete, so a lot to do in a short amount of time. They’ve done a great job with the aero kit. It’s a different car to drive.” 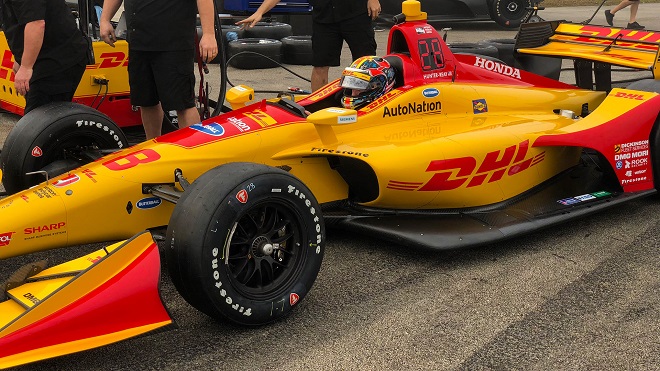 With the DW12 dressed in a third unique style of bodywork since its introduction in 2012, the Andretti Autosport team leader explained the differences in the car’s performance attributes during each era.

“It’s different from the DW12 and the universal aero kit we had from 2012 to 2014,” he said. “It has more downforce than that car, less downforce than the manufacturer aero kits that we’ve had the past few years, so it was a completely different car to drive. It’s definitely on top of the racetrack; more lively, it takes a little bit more wheeling, which I certainly enjoy.

“From a team perspective, we just need to focus on trying to tailor our setups to what this car needs, what it demands to get around the racetrack in a quick amount of time. It’s a new project; it’s certainly going to have its challenges, but I was pleasantly surprised.”

The reduced downforce and a drop in aerodynamic drag has given the 2018 version of the DW12 a feel of having more power from its Chevy and Honda engines. With less downforce and drag to pull through the air at the end of long straights, the cars at Sebring – on entry to the hairpin in front of the Chateau Elan hotel – looked like rockets by the time they arrived at the braking zone.

“Having not been in a car for five months, it feels fast,” he added. “The car just keeps pulling down the straights. With the manufacturer aero kits, you could feel the car hit that plateau in fourth or fifth gear – fifth gear, really, [where] the acceleration rate comes down.

“With this car, it just kept pulling. It feels like we increased horsepower. Less downforce, less drag, and we definitely see it in the speed traces. It takes off, compared to the other car, on the straights.”

With more top speed comes the need to slow the cars to a greater degree than in the past, and with less downforce, brake zones have become longer. It isn’t a drastic change from 2017 to ’18, but Hunter-Reay anticipates more passing attempts will be tried with the new aero configuration.

“Any time we can open up the brake zones a little bit, that’s certainly a plus,” he said. “Better racing has been shown to occur with longer brake zones. The brake zones aren’t massively longer; it’s not like we need to brake a full [100-foot] marker earlier or anything like that, but it is a different approach. The [2017] car, you could get really deep in the brake zone, just jump on the brakes, pop off the brakes, roll through the corner, and it’s gonna stick. Now, that’s not so much the case.

“You definitely have to be very careful with your modulation and how you go about it. It’s nice to really be, from behind the wheel, constantly thinking about how you need to change your style to suit the car.”