For the third time in six seasons BMW Motorsport Team RLL will show up at the opening race of the IMSA WeatherTech SportsCar Championship season with a new model car. This time, BMW Motorsport unveils the M8 GTE, based on the yet-to-be released road-going M8 that was revealed at summer’s end in 2017.

In addition to an assault on the IMSA WeatherTech Championship, BMW will also return to Le Mans in 2018 for the first time since the mighty V12 LMR won the race overall in 1999. Thus, the M8 GTE will form the foundation of a two-pronged attack, with the FIA World Endurance Championship also on the menu. Perhaps for this reason, that the M8 GTE is a more racing-focused machine that its predecessors, the Z4 GTE and the M6 GTLM.

“The M6 GTLM didn’t begin with the intention of running in the GTLM class,” says BMW Motorsport Director Jens Marquardt. “It was originally planned as only a GT3-spec car, but when some rules convergence initiatives didn’t work out in 2014, we were already too far up the path to turn back. So, I’m very grateful to IMSA that they were willing to work with us to make the changes we had to do to the M6 to allow it to race.”

The M8 GTE, on the other hand, has been fully conceived from a clean sheet, with the specific objective of endurance racing in the top GT class in both the U.S. and internationally. 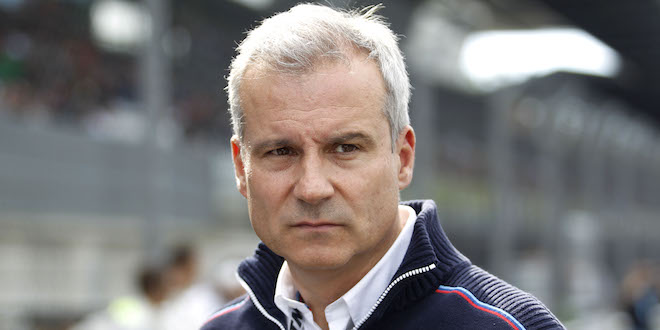 Marquardt credits his team at BMW Motorsport in Munich who collectively work on all their programs from IMSA to DTM, and now WEC and Formula E, for taking the collective experience gained from all the series and focusing it forward on the 2018 programs. Because of the effort put it in, Marquardt insists that BMW will arrive at the Rolex 24 At Daytona with victory as it only target. This is despite being the only all-new car on the GTLM grid.

“We recently completed a 24-hour test at Circuit Paul Ricard and I’m very happy with the results,” he says. “No test is ever perfect, but I’m pleased to say that all the problems encountered were successfully resolved in the first try. So, I really need to give my guys credit that they are applying all of their experience from not only what we learned with the M6 GTLM, but also from what we are doing in other race series.”

The M8 GTE will be powered by a 4.0L turbo-charged V8 that produces over 500 horsepower.

“On the engine, there has been a lot of effort put into both efficiency and performance,” says Marquardt. “Compared to the M6, we have all new electronics in the engine management and the gearbox is also all-new.”

“In this respect, we didn’t target any customer-racing programs with this car,” he says. “It is really only a proper works car.”

The approach that BMW has taken with the M8 GTE has in part come as a response to the elevated technology and purpose-built approach that a few of its GTE/LM competitors have taken to their cars. Indeed, some say that the Ford’s GT and Porsche’s 911 RSR have pushed the rules as far as possible, and are closer to a prototype in GT clothing. To this point, Marquardt believes that while the M8 GTE is a bespoke racecar, it is still very close in spirit to the eventual production version, and thus a purer GT car.

“The chassis for the M8 road version is built in the same line as the GTE cars, and the engine location and transaxle concept are exactly the same in both cars,” says Marquardt.

“Surely, we will exceed the production volumes that are required for homologation, and to the best of my knowledge neither Ford [with the GT] or Porsche [with a mid-engine 911] have as of yet.

“Ford has done a great job of starting with a pure racecar and then finding a way to build the minimum number needed for a road car. We have chosen to do the opposite, because the concept for the M8 as a road car came first.”

To underscore how the M8 GTE straddles the line between pure-bred racecar and production road car, Marquardt explains a key chassis difference.

“Production cars have a lot of safety and comfort requirements that make them quite heavy compared to a racecar,” he says.

“As a result, to meet those requirements and still have the desired performance the road car chassis is made very stiff. They are actually too stiff for the weight of a racecar. So for the M8 GTE, we have replaced the steel front subframe of the road car with a carbon crash structure that meets our targets for weight and stiffness on the racecar.”

The M8 GTE is smaller, lower and of shorter wheelbase than the outgoing M6 GTLM, but it is still a large car by racing standards. So Marquardt expects that the flowing, longer tracks as found across the WEC as well as Daytona, Sebring and the summer swing of traditional natural terrain road-courses that IMSA will compete on are most suited to the M8 GTE’s characteristics. If the BoP is managed correctly, this GTLM season is serving up to be one of the most anticipated yet.

“Everyone is very excited about this new car, and Bobby [Rahal] and his team are eager to start racing,” Marquardt says. “We know it’s going to be a lot of hard work, but this car is a big step forward.”