Never-give-up attitude of Cotton serves as an inspiration

Never-give-up attitude of Cotton serves as an inspiration

To say the odds were stacked against Jerry Cotton in 2017 would be a huge understatement.

At an age when most folks retire and battling a health condition which left him nowhere near full strength, Cotton came within one round of becoming an International Hot Rod Association (IHRA) World Champion.

Cotton was the track champion at Indiana’s US 41 Motorplex and followed it up by finishing runner-up in the Top division at the IHRA Summit World Finals at Memphis. All this came in a year which the 69-year-old went through an aggressive series of cancer treatments.

“I had colon cancer and I had gone through an advanced program with chemo and radiation,” he said. “It was tough. It knocks the wind out of you and it makes you weak. But, I battled through it and worked every day. I didn’t want to just wait around. Everything came out good and it turned out to be a spectacular year.”

In addition to the racing, Cotton kept working at Dyer Auto Auction where he runs the mechanic shop and frame shop. It’s a business perfectly suited for him because he’s always loved being around cars. 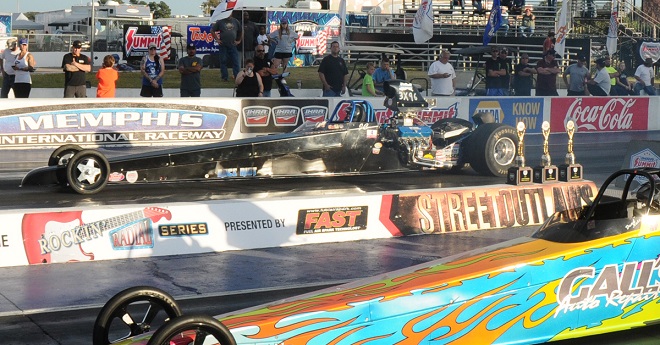 He’s also loved speeding down the drag strip, first getting on the track as a teenager behind the wheel of a 1964 Ford Falcon with a small-block Chevy motor. Now his car is more exotic, a 2005 S&W dragster with a 582 cubic-inch Chevy engine.

“She goes down the track without too many problems,” he said. “I’ve had this particular car for three years. I’ve had a lot of dragsters over the years and I had a ’27 roadster that I traded for this car.”

The dragster helped him get all the way to the final round at the IHRA Summit World Finals, the largest and most prestigious bracket racing championship in drag racing. In the championship round, he had a better reaction time .018 to .035 than eventual champion Tom Gall, but ended up losing by a razor-thin margin of just .001 second.

Still, it was an amazing feat after a mechanical issue forced to Cotton rely heavily on his years of experience.

“The first day, I made one pass and the car was good, but then my carburetor started messing up,” he said. “The next day, the racing started and I didn’t know what it was going to dial. I went in my books and looked at what I thought it would run. It happened to be the right number and the car ran that same number all day. I had it in the final and then I gave it away.”

When he looks back, though, the experience of being at the championship event, which included a huge racers’ party by Trick Flow Specialties, far outweighs the disappointment of losing in the final round.

“It was amazing to go to Memphis for the World Finals,” Cotton said. “My wife went with me, along with one of my best friends and the pit crew. We just had such an enjoyable time, such a great way to end the season.”