McLaren executive director Zak Brown has definitively ruled out McLaren returning to the Indy 500 in 2018 despite the success of Fernando Alonso’s attempt this year.

Alonso made his debut in the May showpiece driving a McLaren-Andretti entry, and led a number of laps before eventually retiring with an engine failure in the closing stages. The appearance resulted in huge global interest, and Brown has previously stated he wants to return to the Brickyard with McLaren in the future.

During an exclusive interview with RACER, when asked if McLaren’s next IndyCar race will be as part of a full-time commitment to the series or another Indy 500 appearance, Brown (below) replied: “Good question, that’s under review. 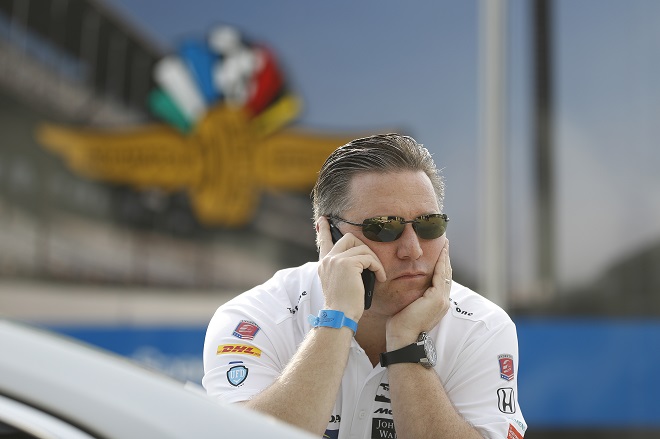 “Given that the Indianapolis 500 is a big percentage of IndyCar’s overall awareness, does that give you enough to accomplish what you want to do, or do you want to do a full season? That’s all part of the review process.”

However, with Alonso ruling out an attempt in 2018 in order to focus on McLaren’s F1 program – where it will use Renault power units for the first time – Brown sounded out potential drivers before opting against an immediate return.

“It’s off the table,” Brown confirmed. “It didn’t tick all of the boxes and it will be hard to repeat the awareness we created with Fernando. But McLaren, we’re proud, and when we do things we have to do things the McLaren way.

“We could have gone to Indy next year as just another Indy 500 entry but that’s not McLaren. If we can’t do it right and be a big part of the show, then we don’t want to do it.

“Also, priorities [come into consideration]. How much time am I or we prepared to spend on going to Indy? Because I’d rather the next time we go – whether that be Indy 500 only or IndyCar – it not be a one-off. So if we take the decision it’s Indy only, I would like it to be Indy only for the next 10 years. Buy a car, partner with a team, but we’re committing to it long term. This year was a one-off, crazy idea that turned into a great opportunity.”