I have a two-year-old daughter. She loves Peppa Pig, dinosaurs, scary robots, and pasta. And as I suspect is the case with all two-year-olds, she has no real concept of limitations. If she can think of something, she assumes that there’s some way that she can do it. Now, as a parent, that can be terrifying – toddlers are basically tiny Evel Knievels – but at the same time I deeply hope she retains that optimism and ambition, tempered with some vague sense for self-preservation, as she gets older.

In short, I hope she does not grow up thinking like Carmen Jorda.

If you hadn’t heard of Jorda until recently, it’s probably because she’s not a very well-credentialled racing driver. There’s no shame in that. Most people are not very well-credentialled racing drivers. What sets Jorda apart is her apparent conviction that the reason for her lack of success is that she’s female. And that’s a problem, because she has just been appointed to the FIA’s Women in Motorsport Commission.

Basically, the point of the Commission is to advocate for women in racing. Its website speaks of the need to “show that the door is open to women in all aspects of motorsport” and to “support and accompany current female drivers; to encourage the participation of new young drivers and officials; to promote the involvement of women at all levels of motorsport and to highlight where women are successful thus strengthening their participation.”

One thing that sets motor racing apart from the vast majority of other sports is that women can, and do, compete against men at the professional level, and have done so for decades. That’s something to be celebrated. Jorda? She has spent the past couple of years calling upon the FIA to establish a separate Formula 1 championship for women because she doesn’t believe they can race against men. Here’s what she told ESPN last year:

“They think because we are driving a car we are on the same level as men, which is completely not true because we will never be the same as them. I have had to fight through many things to get to the top of this sport, just because I am a woman, and that is not fair.” 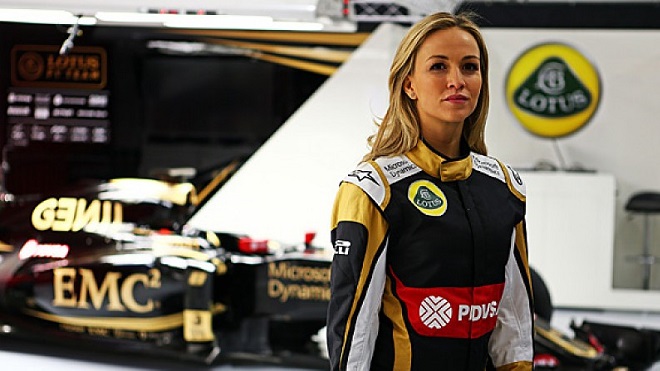 In another interview, Jorda claimed that women can’t summon the physical strength required to match a male in a racecar. I’ve watched Simona de Silvestro drive a lot of laps in an IndyCar without the benefit of power steering. She seemed to be doing just fine.

Jorda’s argument that she has “had to fight through many things to get to the top of this sport, just because I am a woman, and that is not fair,” also looks shaky under a microscope. On the contrary, the closest most drivers with her CV get to Formula 1 machinery is posing for a photo next to a show car in the Fan Village.

Jorda has held development driver roles with Lotus (pictured above) and Renault. It’s a largely symbolic job that often amounts to little more than standing around in a team shirt waiting for occasional turns in the simulator, and some – including perhaps Jorda herself – pay for the privilege. But it’s still more than her raw results warrant, and at risk of sounding unnecessarily unkind, a glance at her career statistics suggest that it’s not Jorda’s gender that has been holding her back here.

But her lack of speed is not the issue. The problem is that her regressive view of the sport renders her entirely unsuited to serve as an advocate for the advancement of females in racing, and her appointment undermines that work done by those for whom gender really was a barrier to be overcome – Lyn St James, Michelle Mouton, Janet Guthrie – as well as those who are already competing, and succeeding, as we speak.

Just this year, Christina Nielsen won her second IMSA GTD title on the bounce alongside Alessandro Balzan, while Katherine Legge combined with Andy Lally in the same class to deliver two wins and two additional podiums. The Force sisters, along with Erica Enders, have been delivering for so long in the NHRA that gender ceased to be part of that conversation years ago.

As my daughter gets older, she’s going to find that there genuinely are some limitations in life. But there are also artificial barriers that she’ll hopefully find a way around. And whatever career path she chooses to follow as she gets older, I hope that she looks to people like Nielsen and Legge, or engineers like Leena Gade, as inspiration for what she can do, rather than the likes of Jorda trying to impose their perceptions of what she can’t.