The Corvette has long been a staple of Pirelli World Challenge competition. In the series’ early days, C4 Corvettes – many of which were refugees from the short-lived Corvette Challenge series – made up a huge chunk of the GT field, and R.K. Smith drove a Corvette to the first championship under the World Challenge banner in 1990. Corvette still holds the record for the most PWC victories of any model despite the fact that the last victory in one came courtesy of Mike Skeen in 2013.

With the advent of GT3 becoming the formula for World Challenge GT, though, Corvette was absent. It’s not that there wasn’t such a thing as a Corvette GT3 car; it’s that GM didn’t want any GM GT3 cars competing in the U.S. except its Cadillac. With the suspension of the Cadillac ATS-V.R GT3 program at the end of the 2017 season, the door opened for Reeves Callaway to bring the Corvette GT3 that he built for the rest of the world to the States. Callaway Competition will run two cars in PWC, with World Challenge winner and 2017 SprintX champion Michael Cooper driving one and ADAC GT Masters veteran Daniel Keilwitz in the other as full-time drivers.

Callaway (pictured below) made his name modifying and improving the performance of Corvettes, notably through a twin-turbo system he developed for the C4. Eventually Callaway would take his cars racing, first in IMSA’s Supercar Championship and later to the 24 Hours of Le Mans. So when GM didn’t show much enthusiasm for creating a Corvette for the GT3 category, Callaway was a bit mystified. He also saw an opportunity. 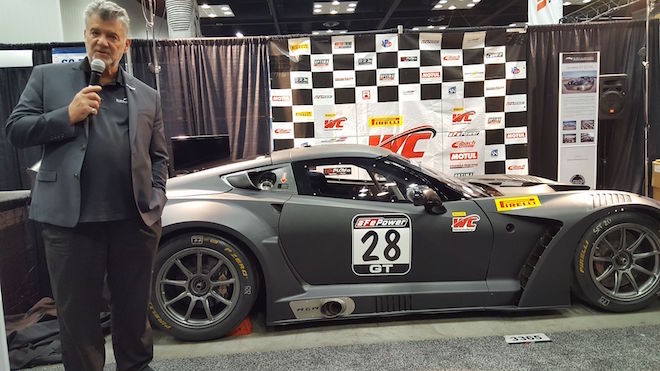 “We were very intrigued by the concept of GT3 because, in a performance-balanced series, every manufacturer believes they have a chance to win,” explained Callaway. “We knew the Corvette was a good horse to ride. We were a little surprised when there was relatively little interest on the part of GM in participating in GT3. As a result, they said to us, ‘If you’re interested, why don’t you go do it? And we’ll authorize you to be the homologation holder for GT3 of the Corvette. Your mission would therefore be to design, develop and promote the Corvette as a commercial racecar candidate to compete against all the others.’ So we said we’ll take that assignment. Conveniently, all our racing efforts that were directed toward Le Mans were in Germany anyway, so it was logical for us to take the Corvette and build them into GT3 specification cars out of the race shop in Germany.”

Callaway Competition has been running the cars in the German ADAC GT Masters series, and driver Jules Gounon claimed the title in 2017. Now the team has the sanction from GM to race the car in the U.S. and it has chosen World Challenge to make its debut.

“The format is the format we’re already used to,” he said. “The hour-long driver change format [for SprintX], that’s the format for GT Masters. So we wanted to go from strength to strength, so that was a big factor. But, also in a first-year effort, we only have one chance to make a first impression, so we didn’t want to stretch ourselves too thin. So if we had tried to supply a factory-backed car in each series, or both simultaneously, we would have stretched ourselves too thin,” Callaway says. He adds that it will be a one-year factory-backed effort to establish the car’s reputation and build sales; thereafter it will be a strictly customer effort.

Callaway Competition will rely on the experience from GT Masters, and many of those who have worked on that endeavor will be at the World Challenge races to help train their American counterparts. Erin Gahagan, who was the manager at Effort Racing before it folded, will serve as team manager, and the team will operate out of Callaway’s West Çoast facility in Temecula, California.

Despite the car’s success in Europe against teams running the usual GT3 suspects from Audi, Porsche, AMG, BMW, Lamborghini and Nissan, Callaway is reserved about his chances in PWC.

“We all know racing is a confounding and very difficult and humbling business, and here we are going into a whole country’s worth of racing, in which we have relatively little experience. So we’ve got some great drivers on board who have the experience. We’ve got the strong assistance of Pirelli and PWC as an organization – they’ve been pushing to get the Corvette into the series for longer than this year, or last year; I think it’s been obvious by its absence. So this will be a great year. I’m hoping, of course, to be abele to run at the front.”

Callaway announced the drivers and some details about the program today at the Performance Racing Industry trade show before taking the cars to California for winter testing.