Alfa Romeo Sauber has confirmed Charles Leclerc and Marcus Ericsson will race for the team in the 2018 season, as well as showing off an initial team livery.

Leclerc has been testing for Sauber on numerous occasions this season, including four FP1 runs toward the end of the year. The Ferrari youngster impressed with a dominant Formula 2 campaign, capping his championship-winning year with victory in the final race in Abu Dhabi on Sunday.

“I am very happy to be entering Formula 1 in 2018,” Leclerc said. “First and foremost, I would like to thank Ferrari for their support. I would also like to thank Sauber for their trust and confidence in me as a driver, and look forward to joining the Alfa Romeo Sauber F1 Team for the upcoming season.

“It was a great experience to drive a few FP1 sessions and tire tests for the Sauber F1 Team in 2017, during which the team welcomed me straight away. It is a great working environment, and I already feel confident and comfortable here. In 2018, my aim will be to gain more experience in Formula 1, and to bring as much value to the team as possible in return.”

While Ferrari was weighing up whether it wanted to place Antonio Giovinazzi at Sauber, the team has opted to only secure a Formula 1 race seat for Leclerc, with Ericsson being retained for what will be his fourth season at the team and Pascal Wehrlein losing his seat.

“It is a great honor for me to be driving for this team in 2018, and I am excited and proud to be part of this promising journey,” Ericsson said. “I am confident that I can add to the knowledge and experience of the team. This winter is going to be very busy, and it will be important to push the development of the car in order to have a good start to the season. I am optimistic, that 2018 can be a big step and a good chance for us to move up in the field.”

Giovinazzi is still part of the Sauber line-up, with the Italian taking on the role of third driver and set to participate in a number of Friday practice sessions during the 2018 season having raced twice at the start of this year in place of the injured Wehrlein.

Despite scoring all five of the team’s points for Sauber this season, Wehrlein now only has Williams as an option in F1 for 2018, with the Mercedes youngster facing a potential return to DTM. 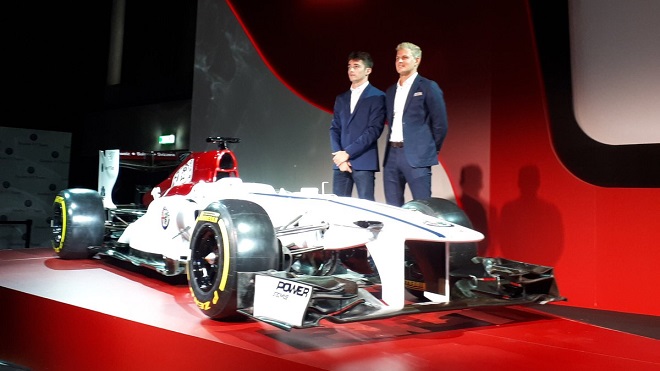 The driver line-up was confirmed by Fiat Chrysler Automobiles CEO Sergio Marchionne during a launch event of the new Alfa Romeo Sauber partnership – announced earlier this week – in Milan. During the event, a previous generation F1 car was unveiled featuring a red and white livery and a prominent Alfa Romeo badge (above, with Leclerc and Ericsson).

Sauber had originally agreed a deal to use Honda power units in 2018 before the replacement of team principal Monisha Kaltenborn with Frederic Vasseur saw those plans change and a new Ferrari contract signed. Having used a year-old power unit this season, next year will see Sauber running the latest specification in a deal that has since been extended to the Alfa Romeo partnership.