NASCAR Hall of Famer and World War II hero Walter “Bud” Moore has passed away at the age of 92.

A passion for cars led the South Carolina native to NASCAR in the 1950s, where he first won a championship as Buck Baker’s crew chief in 1957. By 1961 Moore was overseeing his own teams and in 1962-63, Moore was again a champion but this time as the car owner for Joe Weatherly.

Moore’s success in auto racing came after he served in the military upon graduating from high school. A machine gunner, Moore was assigned to the 90th Infantry Division, which landed on Utah Beach (France) on D-Day in June 1944. Serving alongside General George Patton, the units helped liberate Europe.

“Many choose the word ‘hero’ when describing athletes who accomplish otherworldly sporting feats, NASCAR chairman and CEO Brian France in a statement. “Oftentimes, it’s an exaggeration. But when detailing the life of the great Bud Moore, it’s a description that fits perfectly. Moore, a decorated veteran of World War II, served our country before dominating our sport as both a crew chief and, later, an owner.

“On behalf of all of NASCAR, I offer my condolences to Bud’s family, friends and fans. We will miss Bud, a giant in our sport, and a true American hero.”

Moore was inducted into the NASCAR Hall of Fame in 2011. He had been the oldest living member.

Moore said that night, “It’s an honor to be one of the first 10 inducted into the NASCAR Hall of Fame. It means a lot to see my contribution as a car owner recognized like this. My daughter-in-law once asked me how I wanted to be remembered. The answer is simple: One who made many contributions to building the sport, whose handshake was good as any contract, who always gave a straight answer. Most of all to be remembered as a man who loved his family, his country and the sport of racing.” 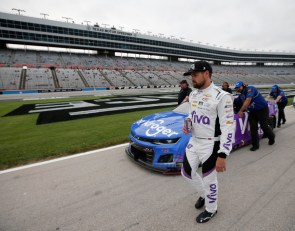