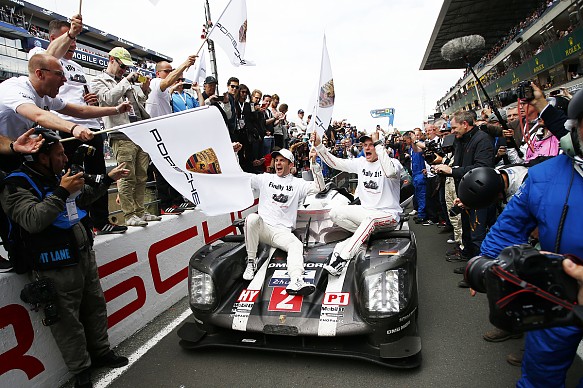 The long-time Porsche factory drivers, whose championship season in 2016 with Neel Jani included victory in the Le Mans 24 Hours, will not race the 919 Hybrid in next year’s WEC, but will be retained by the German manufacturer in new roles. Lieb will take up a position within Porsche’s customer racing division, while a role for Dumas has not yet been defined.

Their departure from the LMP1 line-up leaves three vacancies in the two 919 Hybrids after 2015 world champion Mark Webber’s retirement. Porsche GT drivers Nick Tandy and Earl Bamber, who drove the winning 919 at Le Mans in 2015, now look certain to take two of the seats. Porsche LMP1 team principal Andreas Seidl has repeatedly said that the duo, who competed in this year’s IMSA SportsCar Championship, were “at the front of the queue” to take any vacant drives.

Audi driver Andre Lotterer appears to set to move over to sister marque Porsche following his long-term employer’s departure from the WEC. The German said at last weekend’s WEC finale in Bahrain that he was close to making a decision on his future. It is understood that the opportunities open to him were the move to Porsche or a seat with Audi in the DTM.

Porsche is scheduled to announce the line-up for the defense of its drivers’ and manufacturers’ titles in 2017 at its annual awards ceremony on Dec. 3.

Porsche LMP1 vice-president Fritz Enzinger paid tribute to the contribution of Dumas and Lieb to the 919 Hybrid project.

“The LMP1 program has benefitted immensely from Romain and Marc’s experience, especially during the team’s build-up phase and at Le Mans,” he said. “Together we went through some highs and lows in recent years, and I am very pleased that both true racers can conclude this part of their Porsche careers as Le Mans winners and world champions.”

The 38-year-old Dumas, who became a Porsche factory driver in 2003, said that taking a second Le Mans win with Porsche after his 2010 triumph while on loan to Audi was “a dream come true.”

“I am proud of what we achieved all together over many years,” he added. “I am a man of challenges and there will be a new one soon.”

Lieb revealed that he always envisaged his stint in LMP1 after a long career with Porsche dating back to 2000 “would be my last seat as a works driver.” The 36-year-old, who has a degree in automotive engineering, explained that he had “managed to set the course early for my future career outside the cockpit at Porsche.”