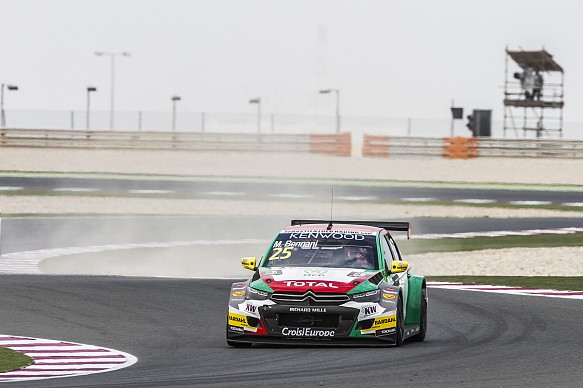 After advancing to the Q3 shootout session with the fifth-fastest time in the second part of qualifying, Bennani recorded an initial benchmark of 2m00.456s in his Citroen C-Elysee with his single flying lap.

Having returned to the garage, the Moroccan then watched on as each of the remaining four drivers in the shootout failed to improve on his effort ­– handing him pole for Friday evening’s second race.

Norbert Michelisz made it through to the final part of qualifying, but failed to record a time after crashing into a tire barrier on the exit of Turn 4 on his shootout lap and damaging the front of his Honda Civic. That incident brought out the red flags in the shootout session, forcing the Volvo Polestar S60 of Thed Bjork back to the pits, the Swede having taken to track for his warm-up lap.

Bjork was able to attempt his qualifying run a quarter of an hour after he had first headed out, but couldn’t quite match Bennani and ended up 0.036 seconds slower.

World champion Jose Maria Lopez appeared well-placed to take pole as the last driver to take to the circuit, but he dropped more than half a second toward the end of his lap and instead ended up third.

Lopez became the first WTCC driver to lap the Losail circuit under the 2m00s barrier in the opening part of qualifying – recording a time of 1m59.788s – but could not replicate that in the shootout and will start the final race of the year from the second row.

In his final qualifying session as a WTCC driver, Lopez’s factory Citroen teammate Yvan Muller had also been on course to snatch provisional pole from Bennani, but lost out in the second half of his run and qualified fourth.

Rob Huff was denied a spot in Q3 by a late improvement from Bjork, Huff instead ending up sixth and 0.040s shy of eventual poleman Bennani’s Q2 effort.

Practice pacesetter Tiago Monteiro was seventh fastest in Q2 behind his Honda teammate Huff, while the second Volvo of Robert Dahlgren and Lada’s Gabriele Tarquini were eighth and ninth.

Bennani’s SLR teammate Tom Chilton recorded the 10th-fastest time in the second part of qualifying, and with that effort secured pole for the evening’s opening reversed grid race.

Nick Catsburg was 11th ahead of Lada teammate Hugo Valente, who had been fast in practice and the first part of qualifying before suffering suspension failure that brought Q2 to a halt.

Tom Coronel was the biggest scalp of the first part of qualifying, the Dutchman finishing the session just 0.093s slower than compatriot Catsburg who sealed the final spot in Q2.

Citroen won the final MAC3 session of the season in bizarre fashion.

The manufacturer had chosen the three SLR cars as its nominated selection for the time trial to thank the independent team for helping it to the manufacturers’ title. But Bennani, Chilton and Demoustier were the only trio to contest the run – with Michelisz and Valente’s qualifying problems meaning neither Honda or Lada could field the mandatory three cars.