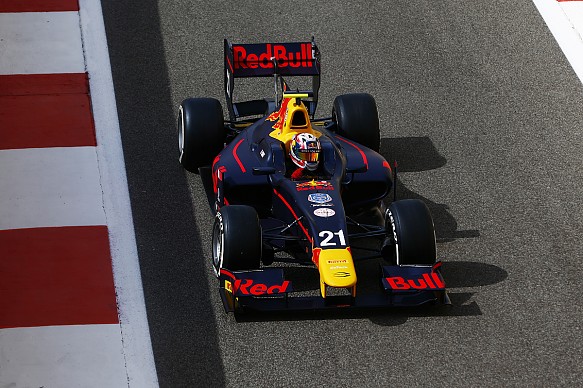 Gasly, overlooked for a 2017 Toro Rosso Formula 1 drive, trails Giovinazzi by seven points. The 20-year-old claimed top spot inside the first 15 minutes with a time of 1m51.096s, despite being one of many to have lurid moments on what appeared to be a slippery track surface. That stood until Giovinazzi improved to a 1m51.067s with a little over 10 minutes to go, which put Giovinazzi 0.029 seconds up.

Gasly responsed quickly, setting the weekend’s first sub-1m51s lap, a 1m50.940s. His new benchmark stood for the rest of the session, with DAMS driver Alex Lynn popping into second place inside the final five minutes with a 1m51.002s. That demoted Giovinazzi to third, 0.127s slower than his teammate, although a run of other quick laps suggests he has consistently strong pace on the prime medium Pirelli.

Nobuharu Matsushita led the way briefly early in the 45 minutes but did not improve thereafter and wound up fourth. The only other driver in – albeit slim – title contention, Raffaele Marciello, set the 11th-fastest time.

Marciello is 39 points behind Giovinazzi in the championship, and essentially needs to win both races with neither Prema driver scoring any points.

The only driver to strike trouble was Mitch Evans, whose Campos Racing-run Dallara stopped at Turn 7 midway through the session. The Jaguar Formula E racer wound up in 14th place, two spots ahead of Emil Bernstorff on debut with Arden.