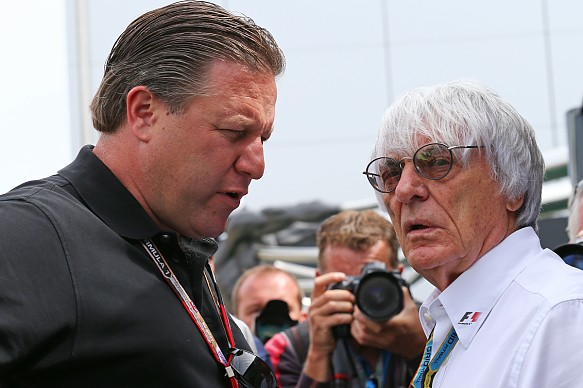 Zak Brown, one of Formula 1’s leading commercial figures, is to step down as CEO of the CSM sport marketing and entertainment group at the end of the year. The move could free him to take up a role alongside new F1 chairman Chase Carey.

Brown (pictured, with Bernie Ecclestone) has emerged as one of the strongest candidates for a senior F1 commercial position, given his track record of delivering new sponsors to teams and to F1 itself. These have included Martini with Williams, UPS with Ferrari, Johnnie Walker with McLaren and UBS with the F1 Group.

The Just Marketing International group that Brown founded in 1995 became the world’s largest motorsport marketing agency, before being acquired by CSM, the sport and entertainment division of Chime Communications, in 2013.

“I feel privileged to have been part of an extraordinary team during my tenure. I’m satisfied that we have achieved what I set out to do, from the successful integration of JMI into CSM through to preparing a strong business for a successful future,” Brown stated in the official announcement of his departure. “I would like to thank both [Chime CEO] Chris Satterthwaite and CSM Chairman Lord Coe for their invaluable support and commitment, without which these accomplishments and many more would not have been possible. I will take this experience forward to my next chapter in the arena I know best, motorsport.”

In the wake of the Liberty Media takeover of F1 earlier this month, there has been widespread speculation that Carey would seek to make several key management appointments. These would be intended to develop and grow Formula 1 in areas where it is perceived to be ripe for growth, such as digital media and in key territories including North America.

Speaking at the Singapore GP Carey said: “I do understand managing businesses [and] putting the right team in place to be working with Bernie [Ecclestone] and his team.”

While Ecclestone’s position as CEO of the Formula 1 Group is not in question, Carey is keen to establish quickly areas he believes can be developed, and appoint a team charged with delivering on his stated objectives.

“You cannot make everybody happy all the time,” Carey said, “but you’ve got to understand what everybody wants and then find a path.

“That is not a task for a committee, as committees tend to become bureaucratic, but there also can’t be a dictatorship.”

Note: This article has been updated with quotes from CSM’s official announcement.

For the first time in over a month, Stewart-Haas Racing placed multiple cars in the top 10 at the end of a NASCAR Cup Series race. (…)

It was more of the same Sunday afternoon in the NASCAR Cup Series race at Nashville Superspeedway. Kyle Larson dominated. Kyle Larson won. (…)

“Man, you just don’t know what it is about our team right now,” said Team Penske’s Will Power as he celebrated finishing third at (…)

The good news is Kevin Magnussen led a major open-wheel race for the first time in forever. That bad news is the Dane’s NTT IndyCar (…)

One of the best races of the NTT IndyCar Series season looked like it was going to finally take Team Penske out of the winless column; but (…)

Sergio Perez insists he was never worried he might lose third place in the French Grand Prix due to his overtaking move on Valtteri Bottas. (…)

The battle for the Indy Lights Presented by Cooper Tires championship – and a scholarship valued at almost $1.3 million to ensure entry (…)