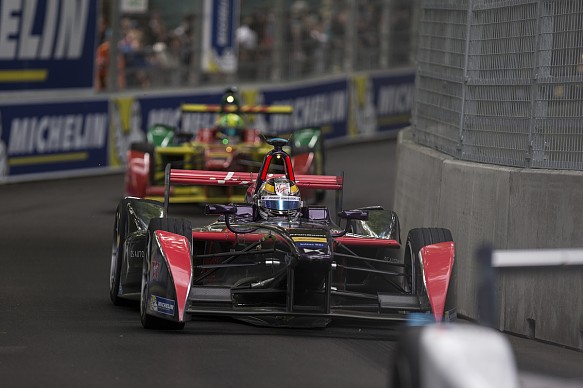 The FIA International Court of Appeal could decide the fight between DS Virgin Racing and Dragon Racing in the Formula E teams’ championship.

DS Virgin beat Dragon to third in the teams’ standings by just one point after last weekend’s London finale, but Dragon has presented an intention to appeal the penalties applied to rival driver Jean-Eric Vergne in the second Battersea Park race.

DS Virgin’s Vergne finished third on the road, just ahead of Mahindra’s Nick Heidfeld and Team Aguri’s Antonio Felix da Costa, but all three drivers picked up a 50-second penalty for using too much energy in their second cars. That cost each of them four places, with Vergne then handed an additional one-second penalty for an unsafe release in the car swaps that helped him jump ahead of Heidfeld.

The extra penalty dropped Vergne behind Heidfeld, but four points for eighth was still enough for DS Virgin to claim third in teams’ standings, even though the trio of energy-usage penalties elevated Dragon driver Jerome d’Amrosio onto the podium.

The American team has subsequently appealed both of Vergne’s penalties, and has 96 hours after the original intentional to appeal to confirm it will go ahead with the protest, after which the process to call the FIA court to meet can begin.

A decision on the intention to appeal is expected by Thursday, but if Dragon proceeds with the protest it is not known when the court will rule on the matter. Until it does, the results remain official but subject to change.

While Vergne’s penalty for using too much energy appears consistent with others, an unsafe release usually results in a drive-through, or a 50-second time penalty if it is applied post-race.

Nicolas Prost picked up a drive-through penalty in the Mexico City ePrix earlier this season for an unsafe release, while Daniel Abt received a 10-second penalty after the race in Beijing for the same infringement. Such a penalty would drop Vergne to 10th, and hand Dragon third in the teams’ standings by two points.

The teams’ championship was won by Renault e.dams, with Abt Audi Sport securing second 49 points in arrears.