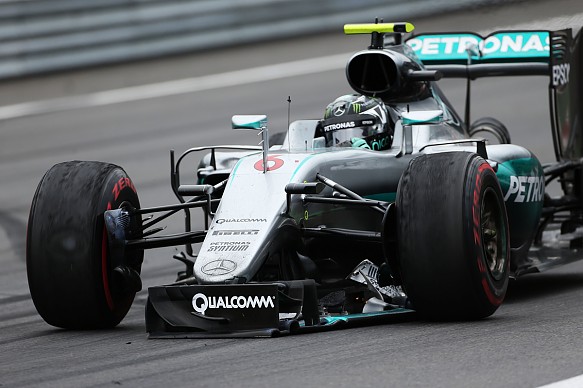 Nico Rosberg has blamed Mercedes Formula 1 teammate Lewis Hamilton for their collision on the final lap of the Austrian Grand Prix that resulted in the Briton winning the race.

Hamilton was hunting down Rosberg in the closing stages at the Red Bull Ring, and on the last lap he attacked down the outside into Turn 2. Rosberg, who was battling braking problems, then appeared not to turn into the corner, leading to contact with Hamilton and front wing damage to his own car that dropped him to fourth by the checkered flag.

“I went a bit deep into the corner, but that’s fine because I’m on the inside – I dictate,” Rosberg told TV crews after the race. “I was very surprised that Lewis turned in and caused a collision.

“We were battling, I was struggling a little bit with my brakes because they got a bit hot in the end. My tires were degrading, so that gave Lewis a chance. Nevertheless I was confident I could defend and bring it home. I had the inside position, a strong position.

“Very gutted – it’s unbelievable, this sport sometimes. I was sure to win that race and then I lost it on the last lap. That’s pretty intense.”

Rosberg is under investigation for the incident – which Mercedes chief Toto Wolff called “brainless” – and for driving his car round to the finish when it was heavily damaged.

“I haven’t thought about what I will say to the stewards – I haven’t seen it back,” he said. “Right now I’m just frustrated about what happened and losing a win like that.”

Hamilton added: “I left a lot of room on the inside at Turn 2, maybe he locked up and crashed into me. Maybe he had a problem with his brakes…”