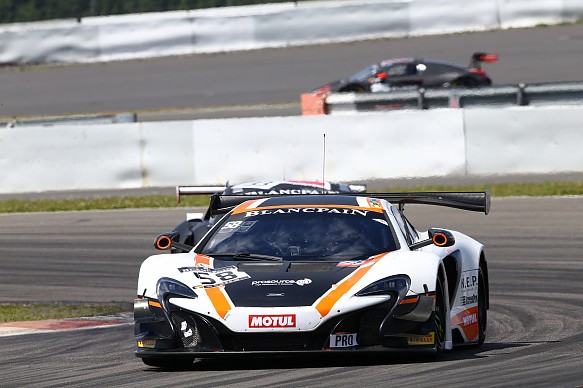 McLaren drivers Rob Bell and Alvaro Parente claimed victory in the full-points race of the Blancpain GT Series Sprint Cup round at the Nurburgring.

Bell led from the start at the wheel of the lead Garage 59 McLaren 650S GT3 before Parente retained the lead after the mid-race pit stops. The Portuguese driver emerged with a two-second advantage over the WRT Audi R8 LMS that Rene Rast had taken over from Will Stevens.

Rast initially closed on the McLaren, but was never able to get close enough to mount a challenge for the lead.

Bell said: “We knew we had a competitive car today, but our guys practised pitstops quite a bit and it really paid off.”

The McLaren’s victory remains provisional, pending an investigation into Bell’s start. Bell reckoned poleman Enzo Ide “was asleep at the start” while he “got a cracker.”

Jules Szymkowiak and Bernd Schneider claimed the final spot on the podium for the HTP Motorsport Mercedes squad after starting Saturday’s qualifying race in 24th position. The HTP Mercedes-AMG GT3 jumped from fourth position during the pit stops after the WRT Audi R8 LMS driven by Ide and Christopher Mies lost time.

Ide and Mies had won the qualifying race from Bell and Parente on Saturday, but Ide lost out to Bell at the start and then dropped behind Stevens on lap four.

Marco Seefried crossed the line in fifth position aboard the Rinaldi Ferrari 488 GT3 after Norbert Siedler stormed up from 11th on the grid during the opening stint. Dominik Baumann and Maximilian Buhk were less than a second behind in sixth aboard the second of the HTP Mercedes.