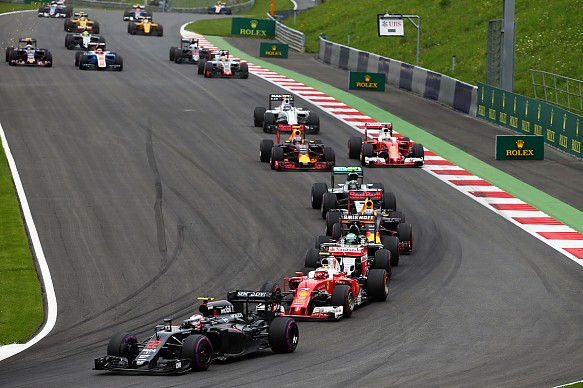 Jenson Button was amazed with his and the McLaren-Honda Formula 1 team’s performance in the Austrian Grand Prix after he finished sixth from third on the grid.

The 2009 world champion ran second behind eventual winner Lewis Hamilton in the early part of the race, before he was shuffled down the order as faster cars battled through from lower grid positions. But Button and McLaren stayed in the fight during a race of attrition, meaning he was able to register his second top-six finish since Honda returned to F1 with McLaren at the start of 2015.

“That’s definitely as good as it was going to get,” said Button. “All the cars that finished in front of us are much quicker, so I’m amazed that we kept them behind at the start of the race.

“We did a good job today, strategy wise we got the maximum out of the car. The traffic was tough because we don’t have the straightline speed to overtake, but I enjoyed it and to get a sixth has made me very happy.

“All in all a great weekend for the team, but more importantly fighting up the front was good as well.”

While Button was able to hang on to second place in the early laps, once Kimi Raikkonen passed him the McLaren driver slid down the order quickly.

“With two DRS zones it was very difficult for us,” he said. “Once one comes past you’re being overtaken in places you never knew were possible, but I enjoyed it.

“In the middle of the straight the other cars just disappear – I can catch them at the end of the straight but in the middle they are very strong. But starting near the front definitely helps you because you’re in clear air and you can do your own thing a bit more.”

Teammate Fernando Alonso retired with an ERS battery failure, after what he described as a troublesome race from the early stages.

“We didn’t have any luck this weekend,” said the Spaniard. “The engine was not running well from lap three or four, we were losing power constantly, we were nearly retiring the car the whole race.

“But we were 10th, 11th, so it was one point on the table for us all race so we tried to finish but at the end it was not possible.”