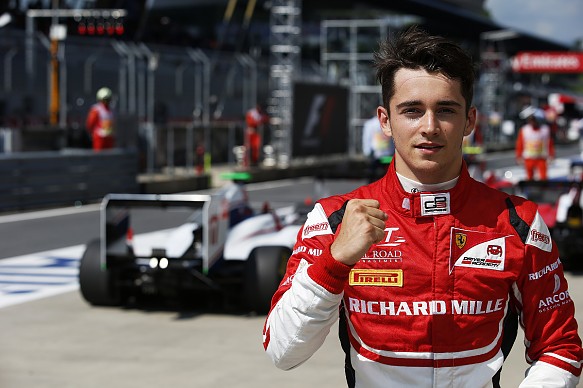 Charles Leclerc left his opposition gasping with pole position by over half a second for the GP3 round at the Red Bull Ring. The Ferrari junior was ahead for most of the session, topping the times from ART Grand Prix teammate Alexander Albon on the opening runs.

Anglo-Thai Albon grabbed pole briefly on his second set of Pirellis, only for Leclerc to beat that time on the following lap by seven tenths of a second.

Although Albon then brought his own best down by two tenths the next time around, the final gap to Leclerc – who gets his first taste of Formula 1 free practice with Haas at Silverstone next weekend – was 0.526 seconds. That performance looks even more impressive bearing in mind that the rest of the 22-car field was covered by less than 1.1s.

Another ART driver, McLaren protege Nyck de Vries, was third at the midpoint of the session and maintained that position on the second runs, although he lost time with a late bid to improve when he ran wide at the final turn.

With Honda-backed Japanese youngster Nirei Fukuzumi ending up fifth for ART, only Koiranen GP’s Swiss GP3 sophomore Ralph Boschung was able to break the French team’s domination as he improved to fourth on the second runs.

Welshman Matt Parry completed a competitive session for Koiranen by taking sixth on the grid. Seventh was Jenzer Motorsport’s Oscar Tunjo, with Arden driver Jake Dennis – who had to readapt in free practice to GP3 from his recent Le Mans exploits – taking the eighth-fastest time.

What looked like a disastrous session for DAMS was rescued at the end of the qualifying. Barcelona poleman Jake Hughes had languished at or toward the bottom of the times for most of the duration, but he finally put it ninth on the grid ahead of teammate Santino Ferrucci.

They demoted Antonio Fuoco, the Trident driver running fourth on the first runs but falling down the order as the session progressed.