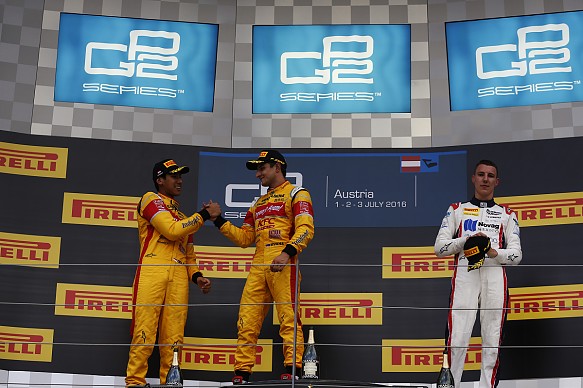 Mitch Evans took victory in a crazy Red Bull Ring GP2 Series race featuring a red flag, four leaders and a sudden heavy shower that wet only half the circuit.

Evans led home Campos Racing team-mate Sean Gelael after both were in a perfect position to benefit having made early stops to get off the super-soft option tire and onto the soft prime.

The race appeared to be a Prema Racing benefit early on, as Antonio Giovinazzi outdragged ART Grand Prix’s poleman Sergey Sirotkin and then Pierre Gasly passed the Russian on the first lap. Gasly took the lead from Giovinazzi on the sixth lap, and the Red Bull junior was in front when rain hit midway through the race and he spun into the gravel at Turn 3.

With Gasly wedged just off the track, the safety car was called out, and many of those running behind the leading group of half a dozen cars opted to pit for wet-weather tires.

One lap after the restart, Giovinazzi locked up and ran wide at Turn 1, giving Raffaele Marciello the lead, but a couple of laps later Giovinazzi repassed his fellow Italian.

Luca Ghiotto also closed in to make it an all-Italian battle at the front, before Marvin Kirchhofer spun and stalled at Turn 3. That brought out the safety car again, and the leading runners all pitted for their super-soft slicks. But pre-race series leader Artem Markelov, who had moved up to fourth, was delayed in his pit stop and then clanged into the pit-exit barrier as he rejoined, causing a red flag.

The green flag was waved with eight laps remaining, which turned out to be just too much time for the super-soft tires.

Russian Time driver Marciello had leapfrogged Giovinazzi at the stops, and when Giovinazzi’s car wouldn’t get going as the race restarted under the safety car it appeared Marciello would be the man to take the battle to the Campos duo.

Once Marciello was up to third he cut the gap to just under a second to Gelael, but the Indonesian then set fastest lap – subsequently improved upon by Evans – as the super-softs on Marciello’s car faded.

Evans crossed the line to win by 4.6 seconds from Gelael, with Marciello completing the podium and Ghiotto fourth in his Trident car.

Arden’s Jimmy Eriksson was another to make an early stop for prime tires, allowing him to win a late fight with the MP Motorsport machine of Oliver Rowland for fifth.

Norman Nato was the best of those to change from slicks to wets and back to dries, the Racing Engineering driver claiming seventh from Sirotkin, who will start from reversed-grid pole.

The final points scorers were Gustav Malja, whose Rapax car had a wing damaged from a clobbering from Sergio Canamasas at the start, and Racing Engineering’s Jordan King.