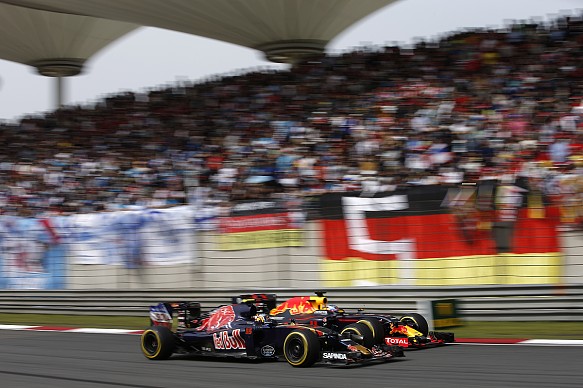 Red Bull team principal Christian Horner said on Wednesday that Daniel Ricciardo and Max Verstappen were under contract until the end of 2018, while Sainz has had his Toro Rosso deal extended for 2017.

While the current contracts suggest Sainz will not find an opening to move up from Toro Rosso for another couple of years at least, he believes he can influence Red Bull’s contractual situation before then.

“Even if contracts are signed for 2018, in Formula 1 contracts are just paper that can be broken very easily,” Sainz said ahead of this weekend’s Austrian Grand Prix. “My job is to keep doing good races, and if I keep doing the same in 2017 I can create my own opportunities. If I force opportunities, they will come. That will be my job and my focus now. What I know is they are keeping me because they want to have me here in case something happens.

“The senior team is a bit too crowded at the moment, so I will have to wait. But I am convinced if I keep doing good races they will find an option for me.

“Knowing I have a seat secured for 2017, I can push flat out with no pressure.”

Sainz acknowledged it was out of character for Red Bull to tie down a young driver so early in the season.

“As a Red Bull driver you always wait until the end of the year to see what they decide, but this year it’s not like that,” he said.

“It’s good news because in such a tough program like Toro Rosso – we all know what has happened here in the past – to decide at the ninth race of the season means I must be performing. We all know Red Bull don’t use a lot of words to explain things, but I had a good conversation with them and I know they are happy.

“They believe Toro Rosso can have a good car next year, and they firmly believe I am the one to exploit that car.

“Hopefully we are the team that gets it right and we can fight for bigger things, and find some surprises.”