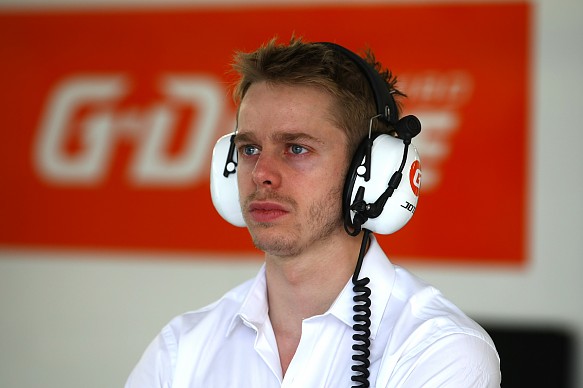 Alex Brundle has taken the vacant seat in the G-Drive Racing ORECA LMP2 lineup for the remainder of this year’s World Endurance Championship.

The 25-year-old Briton, who was the Jota-run team’s reserve driver at this month’s Le Mans 24 Hours, will share the G-Drive ORECA-Nissan 05 with Rene Rast and Roman Rusinov in the final six WEC rounds, starting at the Nurburgring on July 24.

Brundle, who finished runner-up in P2 in the 2013 WEC with OAK Racing, described the chance to race for G-Drive as “a real privilege.”

“With the massive experience of Rene and the pace of Roman, I think we will make a potent combination,” he said.

Team principal Sam Hignett added: “Alex’s attributes as a top endurance performer have been known to the team for some time, and he is clearly one of the UK’s best up and coming sportscar drivers. We are delighted to have him in the team and believe that he is a major prospect for the future.”

Brundle takes the seat filled by Nathanael Berthon for the first two WEC races prior to his release by the team ahead of Le Mans.

Ex-Formula 1 driver Will Stevens was loaned to G-Drive for the 24 Hours by LMP2 rival Manor – finishing second in the class with Rast and Rusinov – and will return to the British squad for the rest of the WEC.

Brundle, who is also leading the LMP3 points in the European Le Mans Series with United Autosports, last raced in the WEC in the 2015 Shanghai round with the Pegasus Morgan team.