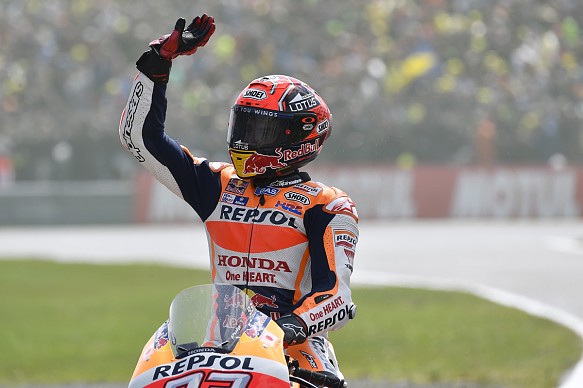 The Honda rider led after Rossi crashed out of the race as Lorenzo struggled on his way to a distant 10th, but Marquez eventually settled for second place behind first-time victor Jack Miller.

Marquez started the weekend 10 points clear of Lorenzo and 22 ahead of Rossi, but those advantages now stand at 24 and 42 points after eight of the 18 races.

“I was pushing also but in the second race when I saw that Valentino was pushing a lot, I said, ‘OK, I’m not in the same level like him.’  When I saw that he crashed, I checked the pit wall and I saw Miller [right behind]. Then I thought, ‘OK, now we will try to manage’ because Lorenzo was also very far behind. When Jack overtook me in the last corner, I just tried to control the third guy, which was Pol [Espargaro] at that time.

“For me the second place was enough.”

Marquez has acknowledged that he has been working to tone down his all-attack attitude, one that took him to a pair of MotoGP titles, but also led to a series of crashes last year while overriding a troubled Honda.

The approach paid off at Jerez, where he was conflicted but took third behind the Yamaha pair, then was disregarded while fighting Lorenzo for the win at Mugello, but returned in the greasy conditions last weekend.

“It’s an important race,” he said. “It was the time to lose many points or gain them. We gained, we were lucky, but also the mentality helped a lot, to just go out and not care about the other riders – just do my race, feel my bike, feel my limits.

“In the second race, I felt a little bit better with the bike than the first one, but Jack was fast and congrats to him because he was riding good in the wet.”