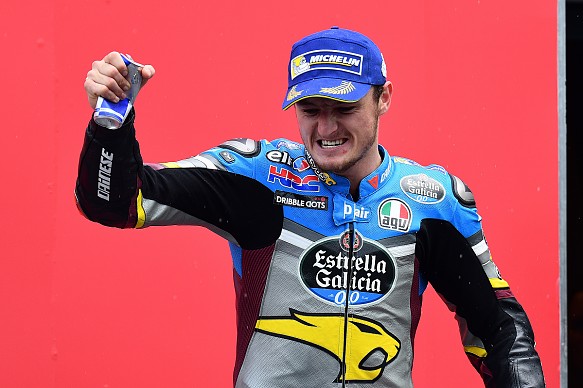 Shock Assen MotoGP winner Jack Miller says his Dutch TT triumph proves to his critics he is “not an idiot.”

The 21-year-old Australian has struggled to make an impression in MotoGP since being promoted straight from Moto3, where he had narrowly missed out on the 2014 title to Alex Marquez, at the start of last year.

The move had been steered by Honda, which placed him at LCR last year before switching him to the expanded Marc VDS team for 2016.

Prior to Assen, Miller’s 10th place in the preceding round at Barcelona had been his sole MotoGP top-10 finish. His previous best race performance – a charge through the field in last year’s wet Silverstone round – ended when he crashed into teammate Cal Crutchlow as both challenged for the podium.

“This sort of makes it clear I do know how to ride a motorbike and I’m not an idiot,” said Miller. “It gives Honda and everybody like that something back for taking such a big gamble on me and the risk those guys have taken to bring me straight from Moto3 to MotoGP and the amount of criticism they’ve got and the amount of criticism I’ve got – people saying ‘he’s a moron’ or whatever.

“This makes it all worthwhile. It’s an amazing feeling, I can’t really explain it.”

In wet conditions at Assen, Miller surged from 18th on the grid to overcome Marc Marquez for victory on a day when the likes of Valentino Rossi and poleman Andrea Dovizioso crashed and champion Jorge Lorenzo struggled to 10th.

“I do get a little bit excited sometimes but I tried to stay as calm as possible,” said Miller. “We put the soft tire in and we were able to make quite a few setting adjustments just because we have had much wet weather practice this year.

“I had a great feeling. I pushed to make my way through.”

Marquez said he had been focusing on finishing the race and bolstering his championship lead more than winning, and Miller said that was evident from the Spaniard’s riding.

“When Vale threw it in the gravel, I saw that Marc had calmed down a little bit,” he said.

“Marc didn’t want to take any risks. Who could blame him? If I went past me, I’d be like, ‘Oh, that d**khead’s going to crash there in two minutes.'”

The result moved Miller up from 20th in the championship to 13th, but he was under no illusions that it would transform his season. The satellite Honda teams have struggled with the current bike and Miller and teammate Tito Rabat have generally qualified towards the back of the grid.

“Turn the season on its head? I don’t know,” Miller said. “It’s great for me to get this but we all know the reality.

“We’re still learning. Coming up from Moto3 to MotoGP was a big step.”