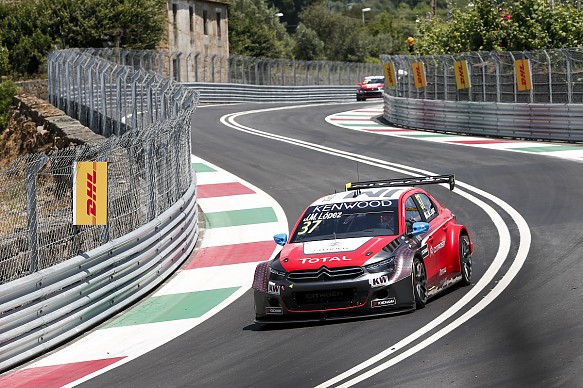 Lopez was overshadowed by the three Hondas in the opening session, finishing fourth and a second and a half down off the pace, but struck back in the second to set the fastest time of the weekend so far, a 1m56.365s.

That left the Argentinian 0.334s clear of Norbert Michelisz, who finished both sessions in second in his Civic.

Michelisz’s teammate Tiago Monteiro backed up his third-fastest time in the first session with the same result in second practice, the Portuguese 0.150s behind his team-mate at his home venue.

Yvan Muller in the second factory Citroen and Polestar’s Thed Bjork separated Huff in the third Honda from his team-mates.

Huff led a Honda 1-2-3 in Saturday morning’s first session, but was quieter in the second and finished the best part of a second down on Lopez’s benchmark, four tenths slower than his practice one pace.

Tom Coronel was seventh in the second session and best of the independent drivers ahead of the leading Lada of Nicky Catsburg.

Catsburg’s team-mate Hugo Valente was a strong fifth in the first session, but finished a second back from him in the second in 12th, with Mehdi Bennani, James Thompson (making his fourth appearance of the season for Munnich Motorsport) and Tom Chilton separating the pair.

Zengo Motorsport’s debutant Daniel Nagy completed his first laps in the WTCC in the first session, but sat out the second with a suspected throttle sensor issue.