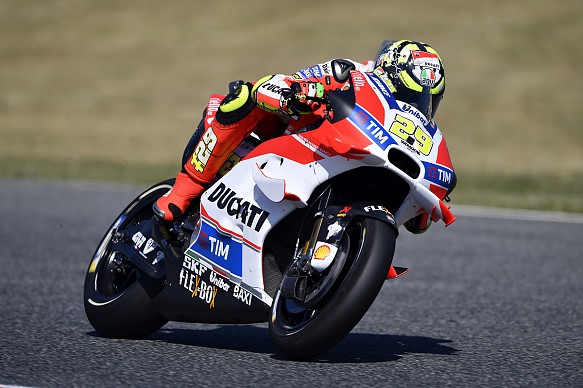 Iannone was at the top of the order for the bulk of the 45 minutes, and finished ahead of teammate Andrea Dovizioso, while Pramac satellite pair Scott Redding and Danilo Petrucci made it four Ducatis inside the top five.

Set to start Sunday’s race last as a penalty for his collision with Jorge Lorenzo at Barcelona earlier this month, Iannone was the first rider into the 1m34s bracket early in the session, which was run in dry conditions despite overnight rain, which is forecast to return over the weekend.

Iannone was displaced early in the second half by Suzuki’s Maverick Vinales and then with two minutes remaining by Petrucci, but his final lap of 1m34.349s was 0.226 seconds faster than Dovizioso’s late effort.

Lorenzo claimed sixth, just ahead of teammate and 2015 Assen winner Valentino Rossi, who jumped up from 11th to seventh with his final lap.

Vinales wound up eighth in the tightly-packed field, with Iannone’s advantage over Dovizioso the biggest between any two riders in the top 13, ahead of Bradley Smith and Avintia Ducati’s Hector Barbera.

The leading Honda rider was world championship leader Marc Marquez in 11th, just ahead of Cal Crutchlow and Dani Pedrosa, all within one second of Iannone.