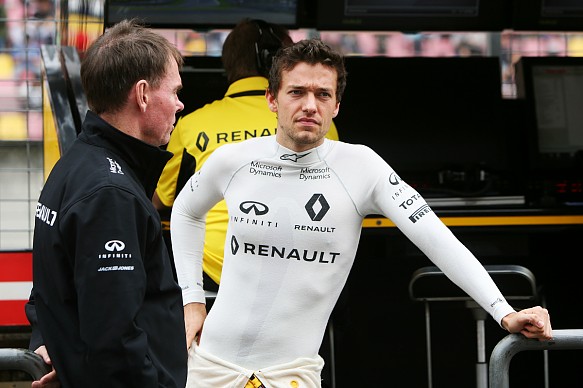 Jolyon Palmer described his Chinese Grand Prix qualifying performance as “catastrophically bad” after qualifying only 19th for his third race as a Renault Formula 1 driver.

Both Renaults failed to get beyond Q1 at Shanghai, but Palmer’s result was particularly painful as he ended up two places and nine tenths of a second behind Kevin Magnussen despite the Dane having lost nearly all his Friday practice running to a suspension failure.

“In Melbourne the performance was there, in Bahrain it was falling away, and here it is catastrophically bad,” Palmer said. “I need to understand it and that’s what I’m going to do tonight, really.

“I think there is something fundamental that we’re missing. You can see it clearly on the data and the balance but we can’t understand what’s affecting it. So we need to have a bit of a delve into the data.”

He said being the only Renault on track for much of the weekend had made it hard to understand if his problems were a whole-team issue.

“I’ve been struggling with it all weekend, but obviously we’ve not had the other car running to compare across the two,” said Palmer. “But now he’s running it looks to be a hell of lot better [on Magnussen’s car]. So we need to work out what’s going on.”

Magnussen was relatively delighted with 17th given the difficult build-up to qualifying. He only managed six laps on Friday, none of them flying laps, before the suspension problem, and then missed the afternoon as the issue was investigated.

Saturday morning’s rain then meant his first proper experience of Shanghai in the dry since racing there for McLaren in 2014 came during Q1.

“I’m quite happy with all that really given that I haven’t done any laps in the dry at all,” he said of his qualifying result. “We could’ve been in Q2 if I had known the track a bit better because it was only two hundredths [away] so there were a few places where we could’ve improved. But this is our level and we can’t be too disappointed when we know it’s the beginning of a long project.”