The TUDOR United SportsCar Championship’s dress rehearsal last week at the Roar Before The 24 has helped IMSA tech boss Scot Elkins to gather the final data points needed to lock down Balance of Performance adjustments.

Now, with practice set to begin in two weeks for the January 25-26 Rolex 24 At Daytona race, the TUDOR Championship paddock, starting with the Prototype class, will undergo more adjustments to bring the DPs and P2s closer together. 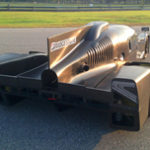 To the surprise of no one, the powerful, slippery DPs dominated the three-day Roar test, posting a best lap 1.1 seconds clear of the fastest P2 entry. The DPs have received a 10 percent increase in horsepower for 2014, accounting for an extra 50-60hp and some of the speed differential to the P2s, and as Elkins told RACER after the test, some of that increase could be pulled back for Daytona.

“The gap got closer, but it’s not close enough yet,” he said. And I think we talked about it earlier, I can’t remember, we’ve got the DP motors on the dyno at the NASCAR facility this week. We’re doing a validation test on them because we haven’t had them on the dyno with the sonic restrictors yet. So we’re validating that and making sure everything is where it is and we’ve worked with the manufacturers to the point of saying, all right, guys, build the engines to 600 hp and here’s where the restrictor needs to be at 600 and we’re just going to go validate that, check it to see where we are. And truthfully, yeah, I think we probably are going to have to reduce the power of the DP a little bit to get back into that area. And by reducing power, hopefully it will do two things: It’ll get us a little closer in top speed and also reduce the lap time difference.

P2 car underwent a few different spec changes during testing last November and December, with weight being added and later removed, and more power being allotted through bigger restrictors. IMSA only had turbocharged P2s at its disposal for those tests, with Extreme Speed Motorsports’ HPD ARX-03b doing the majority of the baseline work for the sanctioning body. With two new P2s at the Roar, and both using Nissan’s naturally-aspirated 4.5-liter V8 engine, IMSA came away with the missing data points it needed to set the restrictor sizes for the Morgan and ORECA chassis that carry the NISMO powerplants.

“I don’t really see much changing on the P2 engine side because we’ve done what we can do in terms of getting everything spooled up,” Elkins continued. “The P2 engines, as you well know, are totally based on production stuff and pretty closely regulated. And we don’t really have much more room than a 5 percent bigger restrictor to go there. So while a little bit more power would help, there’s just no room to do it.”