The FIA presidential election battle risks turning in to a “farce” unless the governing body forces support letters obtained by Jean Todt to be revoked, claims his rival David Ward.

As the dispute over Todt’s push for support letters grows ahead of a hearing of the FIA Ethics committee in the next few weeks, Ward has written to each FIA club outlining his view that the current situation is unacceptable.

Due to the requirement of candidates to have support from a number of clubs, Todt’s lock down of support from 11 of the 12 North American clubs during a meeting in Montevideo earlier this year means that the fate of the election has been left in El Salvador’s hands. It means that the club could not only prevent any rivals standing against Todt, but also that if it backs a rival there is no opportunity for a third candidate to be put forward.

In the letter, Ward wrote: “In order to be eligible to stand in the FIA presidential election in 2013 a candidate must propose a Vice President for Sport from each of seven regions, including North America.

“The written commitments of support that Jean Todt obtained from ASNs and ACNs prior to the beginning of the election process leave only one club in the North American region that is not already formally committed. That club is from El Salvador.

“The absurd situation in which just one club in North America may determine whether or not there can be a challenger to Jean Todt risks turning the FIA election into a farce. This is why I am asking for the support letters to be recognized as a clear breach of the FIA’s rules and revoked in my complaint to the Ethics Committee.”

Ward is keen for a major governance overhaul at the FIA and is eager for every club to start pushing for debate about how the governing body can be made better. 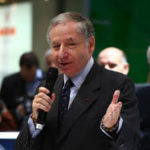 “In standing as a candidate in the 2013 election my purpose has been to encourage debate about the need for further reforms in the FIA,” added Ward. “I believe there are serious flaws in the FIA’s governance system. There are other equally serious problems, for example, regarding the transparency and adequacy of the FIA’s financial accounts.

“The FIA deserves better than this. The FIA membership should not turn a blind eye to abuse of the FIA election system or tolerate deficient governance provisions in the sport that are not accepted in the mobility pillar.”