Organizers of the inaugural Formula 1 Russian Grand Prix say that work on the Sochi circuit is nearing completion, with almost two-thirds of the track already laid out. Pit buildings and team facilities have also been constructed, with work now progressing onto the infrastructure needed to host F1.

The track, being created within the complex that will be used for the 2014 Winter Olympics, has been penclled in for an Oct. 19 race date next season.

“We’re on schedule not ahead, but not behind,” said Dmitry Erofeyev, head of promoter Formula Sochi. “At the moment the pit buildings and team buildings have already been constructed, asphalt has been laid where possible, on almost two thirds of the lap. Works on the interior and infrastructure are ongoing.”

Oleg Zabara, deputy general director of JSC Center Omega, the company responsible for the Sochi project, said the track was well on course for its October 2014 date given the current rate of progress,

“Formula One Management have set a preliminary date for the Russian Grand Prix,” Zabara said, “[and] these dates are very well matched with our plans. Construction work is on schedule and preparation for our first F1 event won’t stop even for a minute.” 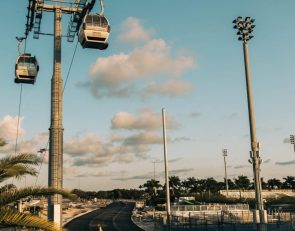