Nitro Rallycross will race on a purpose-built snow and ice track at Stampede Park in Calgary, Alberta for the penultimate round of its 2022-23 season, as part of the annual Chinook Blast winter festival.

Having already raced in the UK, Sweden, and the U.S. so far in its second full-season, the February 4-5 Calgary round will be the second stop in Canada for the championship following a visit to Quebec on January 21-22.

“Since the creation of Nitro Rallycross, we’ve always looked to push the boundaries around creating the most exciting motorsports events on the planet,” said Brett Clarke, president of Nitro Rallycross. “From the drivers, the format, to the tracks and the locations, we’ve built the brand as the next generation of motorsports – Calgary will take that thesis to the next level with an ice track inside the iconic stadium that is Stampede Park.

“We are thrilled to be working with great partners at Tourism Calgary to bring this exciting event to Calgary and Alberta. The enthusiasm and hospitality of the Calgary team is exactly what we look for in our host city partnerships and we look forward to bringing fans from around the world for what we believe will be the biggest motorsports event to come to Calgary.”

“Calgary is the winter sport capital of Canada, and this event is another fantastic reason to visit our city,” said Carson Ackroyd, senior vice president of sales with Tourism Calgary. “We’re excited to have Calgary be part of this international race series that will see Nitro Rallycross bring even more energy to the city’s Chinook Blast winter festival.

“It’s an excellent addition to the schedule of winter events creating vibrancy in our city, activating one of our most iconic venues, and making Calgary an eventful city year-round.” 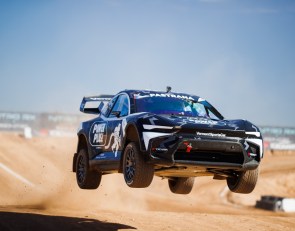