Inside the SCCA, with Laurin Brallier

Inside the SCCA, with Laurin Brallier

My guest on episode 73 of Inside the SCCA — presented by Blayze Coaching — won five races on her way to winning the 2022 Southeast Division Majors Championship in Formula Vee. She’s a finalist in this year’s Mazda MX-5 Cup Shootout and she’s only 18 years old. Laurin Brallier was also having a spectacular run at her first Runoffs until she was caught up in another driver’s wreck after qualifying on sixth.

Brian Bielanski has lived a parallel life of motorsports and journalism for more than 30 years. He started in motorsports in 1986 as his father’s 16-year-old “crew chief” on SCCA FV, Sports Renault and IT Honda CRX efforts. He has also competed in, and plans to compete again, in SCCA Club racing, Autocross and Road Rally. As a journalist he’s worked in news in network staff positions with CNN and CBS and local news in seven markets from LaCrosse, Wisconsin to New York and Los Angeles. In 2009 he founded RacingWire, one of the first web-only motorsports news services given credentialed access at NASCAR, IndyCar, and NHRA events. He currently hosts several podcasts including “Inside the SCCA” and is an editor/producer for KNX 1070 NewsRadio in Los Angeles. 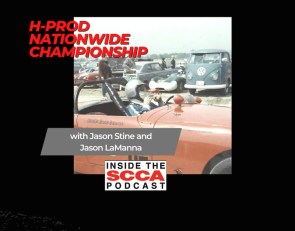