Matt Hagan powered to the Funny Car track record on Friday at Texas Motorplex, taking the provisional No. 1 position for Tony Stewart Racing at the 37th annual Texas NHRA FallNationals.

Austin Prock (Top Fuel), Erica Enders (Pro Stock) and Angelle Sampey (Pro Stock Motorcycle, pictured above) are also provisional No. 1 qualifiers at the 20th event in the 2022 NHRA Camping World Drag Racing Series season and the fourth of six races in the Countdown to the Championship playoffs.

Hagan delivered a run of 3.825s at 334.85mph in his 11,000-horsepower Dodge Power Brokers Charger SRT Hellcat, earning the $15,000 bonus for the quickest run under the lights during the second session. It set the track record for the quickest Funny Car run in Texas Motorplex history and is the second-quickest run of the 2022 season. If it holds, it would also be Hagan’s sixth No. 1 of the year as he looks to make a late-season run for the title. He entered the weekend third in the standings and 103 points out of first.

“It’s incredible that we can come out here to this event, this facility and for Billy Meyer to put that money up there like that, it’s just exciting to get in the car and get up on the wheel,” Hagan said. “To go out there and do it, what a cool feeling to hang on to a car like that. The conditions and this facility at Texas Motorplex, it was just phenomenal, and it was great to put on a show for these fans. It was really digging out there and it just felt great. We just need to step up, be aggressive and leave everything on the table.”

In Top Fuel, Prock picked a good time to possibly pick up his first career top qualifier, taking the provisional No. 1 spot with a run of 3.682 at 334.57 in his 11,000-horsepower Montana Brand/Rocky Mountain Twist dragster. That gave the young standout the $15,000 bonus and in a good position to claim his first career No. 1 spot, which would continue a strong Countdown to the Championship for Prock. He won in Reading to open the playoffs for his second career victory and appears primed for a big weekend at Texas Motorplex after making two strong runs on Friday.

“I’ve dreamed of getting a number one qualifier, so I really do hope it sticks,” Prock said. But I think the coolest part was doing it right next to my teammate (Brittany Force). That just says how strong this team is, but this car has been coming along. We just have to make the right adjustments and then you get a performance like this. We seem to be peaking at the right time and to get this on top of it, that’s really cool.”

Enders’ dominant reign in Pro Stock continued on Friday in Dallas, as she made the quickest run each session, including a strong 6.524 at 210.53 in her Melling Performance/Elite Motorsports Chevrolet Camaro to close out the night. That gave the points leader the $7,500 bonus check for the quickest run of the second session and the maximum amount of qualifying points for the day. Considering she went into the weekend with a 120-point lead, it was another impressive result for Enders, who will try to sweep both races in her home state with a victory this season after her Houston triumph earlier this year.

“I’m super proud to put that Melling Performance/Elite Motorsports Chevy Camaro on the pole, especially in my home state,” Enders said. “The Stampede of Speed is so neat, so huge thanks to the Meyer family and the Texas Motorplex because it’s definitely fun, it adds some really cool environment up there on the starting line. Being that you’re racing under the lights is not something the Pro Stock class gets to do very often, so it makes for a really fun Friday night. I’ve had a great race car all year, and it’s been up to me in the driver’s seat to get it done. We’re doing our best and see what happens.”

The Pro Stock Motorcycle category featured a barrage of standout performances on Friday at Texas Motorplex and Angelle Sampey topped them all, setting a track record on her Mission Foods/Vance & Hines Suzuki with a run of 6.728 at 202.05. The track speed record was broken three times during the opening qualifying session, with Matt Smith setting the mark with a pass of 203.69. The defending world champ made the best pass of the second session, going 6.734 at 203.58, earning the $5,000 bonus check as well. But it was Sampey who led the entire field as she looks for her fifth No. 1 spot of the 2022 season. Entering the weekend 116 points behind Smith, Sampey knows she needs a big performance in Dallas.

“We did get to test on Wednesday and things went well for us, and we figured some things out,” Sampey said. “Definitely going into the rest of the last three races of the year, I have some catching up to do. My mistakes have put me behind. My Vance and Hines/Mission Foods Suzuki is the motorcycle to beat, I just haven’t been the rider that it needs, so I need to turn that around. I’m looking forward to tomorrow and seeing how I can do. I have never won this race. I do not own the cowboy hat and I really want to do that this weekend.”

Smith is currently second thanks to his pass under the lights, while his wife, Angie, is in the third spot after her run of 6.793 at 200.96. She entered the weekend third in points, 90 behind her husband.

Qualifying continues at 12:00 p.m. CT on Saturday at the Texas NHRA FallNationals at Texas Motorplex. 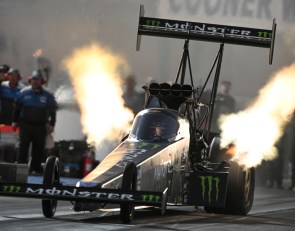