Vips was fastest to open the day, posting a 53.6260s lap before lowering it to a 53.038, which held until the middle of the afternoon when Blomqvist produced a 52.988s tour that sent him to P1. As teams approached the end of the test and some chose to fit fresh tires, Blomqvist bettered his time to the 52.708s which stood until the day was brought to a slightly premature end as rain began to fall.

Blomqvist’s No. 60 Honda was parked until 11 a.m. while the MSR team chased and fixed an electrical problem that kept the car in the pits.

“It was great,” MSR co-owner Mike Shank told RACER. “First of all, he exceeded my expectations and I would put him on par with Nyck de Vries when he tested with us last year. We were super-impressed with both guys and they had the same exact progression and aggression. And there were some good guys out there today, too, and like Tom, none of them had done this before in an IndyCar so they’re all on equal footing.”

Shank said Blomqvist showed him enough to be in the conversation for 2024 when MSR could have at least one IndyCar seat to fill.

“He found out this is a different monster than he’s been used to in sports cars,” he said. “So it was it was definitely a kind of an awakening to the physicality of the car; his shoulders and his arms were beat up pretty good. And I would say the future is wide open. Everything is possible at this point. We’re looking for a diamond in the rough, like when they plucked Robert Wickens from the DTM. I think so far, with what we did in DPi and from what he showed us at this test, I’d say we’re good for each other.”

Andretti Autosport’s Jake Dennis was also among those who made late improvements with his rise to a 53.186s lap. Dale Coyne Racing with HMD Motorsports’ Marcus Armstrong turned his early best of 53.9435s into a 53.473s by the test’s close, and Juncos Hollinger Racing’s Agustin Canapino made a significant improvement as the touring car driver — the only stranger to fast open-wheel cars within the group went from a 54.7255s lap in the morning to a 54.113s at the checkered flag. 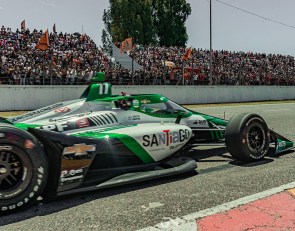