The first 48 laps of the 77-lap race had been a tense strategic duel between Hamilton and Verstappen, with Mercedes putting the Briton on a one-stop strategy to take track position from the pole-winnng Dutchman, who led the race early thanks to a great start.

The Red Bull Racing car had the better pace, but with passing so difficult around the tight Zandvoort circuit and with George Russell acting as a buffer between them, the tactics should have given Mercedes its best shot at a win so far this year.

But the strategy was undone in an instant when Yuki Tsunoda’s AlphaTauri stopped with what the Japanese driver thought was an unfastened wheel on lap 45. He was told to limp back to the pits as a precaution before rejoining, but he stopped on the track a second time on lap 48, this time for good.

A virtual safety car facilitated Verstappen in making his second pit stop cheaply, allowing him to keep track position ahead of the Mercedes cars. But the race was neutralized a second time on lap 56 when Valtteri Bottas’s Alfa Romeo ground to a halt at the end of the pit straight with an engine failure.

This time the full safety car was deployed, and Verstappen was concerned the hard tires he’d just fitted wouldn’t give him enough grip to manage the restart with two medium-shod Mercedes cars behind him. He pitted for a set of softs.

Mercedes split its strategies, leaving Hamilton out on his eight-lap-old mediums but pitting Russell for softs, putting him third behind Verstappen. It guaranteed Mercedes at least one podium finisher but left Hamilton vulnerable to attack.

The race resumed on lap 60, but Hamilton’s getaway was poor. The Briton opened the throttle entering the long final corner, allowing Verstappen to slipstream him all the way through and onto the front straight, where he made an easy move around the outside of the first corner to take a lead he’d never relinquish.

“It was not a straightforward race,” Verstappen said to a rapturous home reception. “We had to push the whole race.

“It’s always special to win you home grand prix. This year I have to say I had to work for it even more. An incredible weekend, and I’m really happy we got the Dutch Grand Prix.”

Hamilton’s race was about to get worse. The soft-shod Russell breezed into second on lap 64. He didn’t have the pace to chase down the leader, but he was buoyed by Mercedes’s strongest showing of the season.

“As a team today we showed incredible pace,” he said. “As a team it wasn’t quite what we’d hoped for, but it gives us a lot of confidence moving forward.

“We as Mercedes are slowly getting closer to that top step, so let’s keep on pushing.”

Hamilton tried to cling to the podium, but the fresh soft-shod Charles Leclerc demoted him from third with six laps remaining.

“To be honest, much better was difficult to do,” Leclerc said. “Max was too quick today. Then there was the Mercedes that was flying on the hard tires. We struggled to find the feeling on those tires.”

Leclerc moved up to equal second in the championship standings with Sergio Perez at a distant 109 points adrift.

Hamilton was enraged to finish fourth after a strong race, and he took out his frustration on the team from the car.

“I can’t believe how much you guys ••••ed me,” he radioed angrily about his late-race tire choice, though he calmed markedly on his cool-down lap after a message from team boss Toto Wolff.

“To all the mechanics: fantastic job today,” he said. “They were the best pit stops we’ve had all year, so thank you for your continued efforts. Let’s keep pushing.”

Carlos Sainz was fifth on the road, but the Spaniard was demoted to eighth with a five-second penalty for an unsafe release in the pit lane.

Sergio Perez was promoted into fifth ahead of Fernando Alonso, who used two sets of soft tires to rise from 13th on the grid. The Spaniard passed Lando Norris late in the race, with the McLaren driver finishing seventh ahead of the penalized Sainz.

Esteban Ocon finished ninth after gaining three places off the lien from 12th on the grid. Lance Stroll took home the final point of the grand prix with 10th.

Sebastian Vettel was penalized for ignoring blue flags and impeding Hamilton in the middle of the race and ended 14th ahead of Kevin Magnussen, Zhou Guanyu, a deflated Daniel Ricciardo and a lapped Nicholas Latifi. 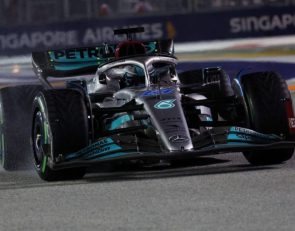