Capps, the defending world champion, put together a run of 3.936s at 330.47mph in his NAPA Auto Parts GR Toyota Supra, knocking off Hagan on a holeshot. Hagan ran a quicker 3.900s at 328.66mph, but Capps was quicker off the starting line to pick up the specialty race win. He beat Tim Wilkerson and John Force to reach the final round, while Hagan knocked off Alexis DeJoria and Robert Hight. Capps’ 0.026s reaction time ultimately proved to be the difference in the finals.

“This turned out to be so much fun,” Capps said. “The car was hauling the mail in the final round and it’s so cool to win on a holeshot and to do it for this much money, I love it for my guys. We’ve had so many special moments this year and this ranks right up there, until hopefully tomorrow. But this one is really, really big for us.”

Looking for his first Dodge Power Brokers NHRA U.S. Nationals victory, Capps also secured his fifth No. 1 qualifier of the season with his run of 3.864s at 333.58mph against Wilkerson. Sunday’s win provided momentum, but Capps knows he could get one of the biggest wins of his career on Monday. He’ll open eliminations against Dale Creasy Jr.

“We’ve got a great race car right now,” Capps said. “Last year stung and that was the run of the year in Funny Car. We’ll take some time to enjoy this No. 1 and this [Callout] win, and we’ll get ready for tomorrow.”

Force delivered a magical moment on Sunday, breaking both ends of the track record at Indy with an incredible run of 3.640s at 337.75mph in her Monster Energy dragster. It gives Force, the current points leader, her seventh No. 1 this season and 39th in her career, but this one is certainly special for the former world champion. She’s after her first career U.S. Nationals, opening eliminations against Dan Mercier in what also ended up being the quickest qualifying field in NHRA history. Mercier qualified No. 16 with a 3.758s at 318.99mph, while Force will try for her fifth victory this season.

“This is definitely a big one for this Monster Energy team,” Force said. “This is the biggest race of the season; it’s the one race everyone wants to win. There’s extra motivation coming into it. It’s Indy and everyone wants to accomplish something here. That was a killer run, especially since we struggled every lap and then we finally got it figured out. It was outstanding. Then for it to be part of the quickest field in NHRA history and to be part of that with 25 cars is pretty incredible. That’s history and we want to leave our mark so to come here to Indy and take that No. 1, we’re just excited.”

Pro Stock’s Anderson wrapped up his third straight No. 1 qualifier this season on the strength of his 6.567s at 208.10mph from Saturday in his HendrickCars.com Chevrolet Camaro. It’s part of a great run for the defending world champion, who is seeking his first victory of the season. He’ll start race day against Fernando Cuadra Sr. and has one goal for Monday: to pick up his 100th career victory. Doing so at the world’s biggest drag race would make it that much sweeter for Anderson, who is also trying to get his seventh Indy victory and first at the track since 2011.

“It’s just nice to have a race car that can win again,” Anderson said. “We were not up to par for the first [handful of] races but we’re back. We’re climbing the ladder and we know that we can win again. Now, we just need to put it all together on Monday. The driver has to have his act together and do a good job. Everyone in this class is a killer. Indy is a marathon, so you’ve got to learn to save a little for Monday. Now, it’s just a matter of who can bring the biggest gun tomorrow.”

In Pro Stock Motorcycle, Sampey held onto her No. 1 spot from Saturday, clinching her fourth top qualifier of the season thanks to her run of 6.796s at 199.88mph on her Mission Foods/Vance & Hines Suzuki. It’s also the 57th career No. 1 qualifier for Sampey, who will try to win the U.S. Nationals for the first time in 20 years. That would wrap up a stellar weekend for Sampey, who is after her third win at the Big Go. She’ll take on Ron Tornow to open eliminations.

“The last two runs today were good, and we feel confident going into tomorrow,” said Sampey, who has seven career No. 1 qualifiers at the U.S. Nationals. “We’re going to hold onto this the best we can and we’re certainly capable of winning this race if I can keep my composure. I’m going to give it my all and I just want to win the race. But I need to do my job in the first round and that’s where I need to keep my focus. I’m just so comfortable on this bike.”

Defending world champ Matt Smith made the best two runs on Sunday and finished second with a 6.800s at 201.16mph, while Krawiec’s 6.826s at 198.79mph from earlier in the weekend put him third. Points leader Joey Gladstone qualified seventh. 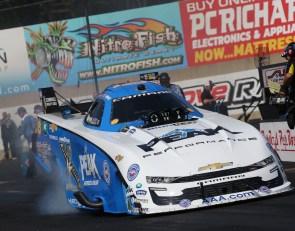