Petty GMS Motorsports making a driver change for its No. 42 Chevrolet after only one season was simply a matter of time. But perhaps not the way you think.

“There’s really no budget; we’re just buying what we need to do to run well. But we cannot have any… I don’t want to say ‘weak link.’ We just have to go. We’re not going to mess around here. Noah knows it. I’ve talked to Noah about it. I said, ‘We’re going to support you, but we’ve got to go.’ Erik [Jones] knows it; what our plan is. Our plan is to run hard and if you wreck it, we’ll bring it home and fix it. That’s the way it is.”

Time is of the essence for Beam, Gallagher and Richard Petty because, as they made known Wednesday at the shop while introducing Gragson, they don’t have much left. And that is exactly how it sounds: Beam is 67, Gallagher is 72 and Petty is 85.

There is no building phase for the operation. Everyone involved wants Petty GMS to become a contender as quickly as possible, so Gragson gets to the call-up to Cup as the organization parts ways with Ty Dillon.

“We always laugh that if we were 40, we’d probably be a little bit more patient,” Beam said. “So we don’t have a lot of patience. We’ve got to fast-track this.”

Petty GMS was born in mid-December, so it’s less than a year old. Initially, Gallagher was entering the Cup Series with one car, as was announced in the fall. But the Petty group knew they needed to do something different to help their own chances of survival, and suddenly Gallagher was buying the majority interest of Petty’s team.

Gragson was signed to a multiyear deal as Beam reiterated the team’s commitment to the change and a young driver. Beam and others have watched Gragson for a while and have been impressed with what he’s done in NASCAR in a short amount of time.

A few weeks ago, Beam remembers thinking how lucky the organization was to be getting Gragson as he watched him battle Ty Gibbs for the Xfinity Series win at Pocono Raceway. Beam believes Gragson will fit right in with the organization because they all have something to prove.

“It’s so exciting,” Beam said of getting Gragson, who has been getting Cup Series experience this year on a limited basis with Kaulig Racing.

Gragson takes over the No. 42 while Erik Jones remains in the No. 43. Jones and his team have had shining moments this season, showing everyone at Petty GMS they have the pieces to be contenders.

“It’s definitely a great shot in the arm for all these 30-some employees – the fab shop guys and everybody that works in here that there is hope,” Beam said. “We all need hope. Hope that you’re doing the right thing, but you’re investing in people and investing in the sport. But you’ve got to have hope that you’re going to get there.

“And then you have hope, and then you go to Talladega and get beat on the last lap, then Atlanta (is a fourth-place finish). Then you think, wow. You really want to make the playoffs, but I’m going to be honest with you that 43 team is overachieving in a lot of ways, and it’s exciting to build it and be a part of it.”

Gragson isn’t sure he can immediately jump in and do what Jones is doing, but he is up for the challenge. Beam just hopes that by May of next year, the team has a direction for where they’re going.

“That’s where this year comes in with learning and getting used to this car,” Gragson said. “Yeah, he’s made it clear. He said it a couple of times – we’re old and we don’t have time to chase this deal. They want to win races, and I think their expectations are pretty realistic to start, and then we can reevaluate. Right now, we just have to get to Daytona and see how we stack up, or I guess after Daytona with that being a crapshoot.

“But once we get a few races under our belt, my goal is to finish every race on the lead lap. I think that’s somewhat of a realistic goal and I feel like it’s a big challenge, too, with everything being a crapshoot and wild. I think they really want to make this a home for me into the future, and I’m excited for it.” 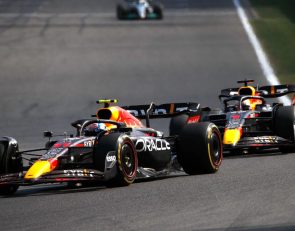