Marcus Lemonis called it a tough decision while confirming that Camping World will not return as the entitlement sponsor of the Truck Series next season.

“What really drove it for me — it’s going to sound odd to people, but I was watching the marketplace change and I was watching inflation take off, and I was watching the cost of housing, car payments, and everything for our 14,000 people get more expensive every day,” Lemonis, Camping World chairman and CEO, told SiriusXM NASCAR Radio. “We just issued a series of raises and not because we just wanted to hold on to people, but we realized that’s how our business works. The reality of it is, math is math.

“I needed to put more in the paychecks of our people. You have to make some tough calls. We’ll continue to obviously be fans of NASCAR and look for opportunities. But it was time also for us to give the keys over to somebody else. Somebody that I think will do an amazing job, and I couldn’t be more grateful and humbled and a little sad.”

The company, which sells recreational vehicles along with RV parts and service, along with camping gear, has been with NASCAR since 2009. Lemonis has used both the Camping World brand and the Gander RV brand (2019 and ’20) as the entitlement sponsor of the Truck Series. He also put his branding on unsponsored trucks in races in recent years, and Camping World was one of Ron Hornaday’s primary sponsors during his 2009 championship campaign.

Lemonis told his employees a month ago the sponsorship deal was coming to an end. Camping World and NASCAR’s most recent seven-year agreement ends after this season.

“My people matter to me more than a sticker on a car or a name on a television,” said Lemonis. “At the end of the day, I’m watching people struggle.”

Lemonis made clear the decision shouldn’t reflect negatively on NASCAR.

“I know they do,” he said. “We were collaborative in that process and I know the sponsor. The reason I’m so definitive about it isn’t because I want to spill the beans. It’s because I don’t want anybody — not a driver, not a team owner, who puts their butts on the line every week, not a track, not an entitlement sponsor, not a radio fan — I don’t want anybody to have any questions that the sport is in trouble. It is not. It’s the strongest it’s ever been, and I think when that sponsor is announced — which I think will be here shortly — I think people will be super excited. I know I am.”

A race to remember for both Smiths at Pocono 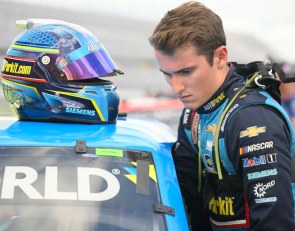