When it comes to supporting amateur racers, Mazda Motorsports excels. In addition to the well-known contingency and parts programs, Mazda Motorsports supports young racers through the SCCA First Gear Mazda Challenge. The First Gear Mazda Challenge (FGMC) was designed for SCCA First Gear members under the age of 25 (for this season, the age cutoff was the end of January 2022) who race Hoosier Super Tour events in the Spec Miata class. The point leader each year earns a free entry to that season’s SCCA National Championship Runoffs in Spec Miata and a free pass to the first round of the Idemitsu Mazda MX-5 Cup Shootout.

This year’s top point scorer is a familiar name to the program: Travis Wiley. Wiley earned the nod last year despite finishing second to Preston Pardus, who already had a free entry as a previous year’s SCCA Super Sweep winner. This year, though? He locked it down without help.

Wiley brought the noise in the final event of the season, earning a second place and a win at the Chicago Region June Sprints to top Connor Zilisch by just three points. Don’t feel too bad for Zilisch, though, who currently sits third in the Idemitsu Mazda MX-5 Cup standings and leads the Rookie of the Year battle in the pro class.

With the FGMC Hoosier Super Tour title in hand, Wiley’s focus now turns to VIRgina International Raceway and his second appearance at the Runoffs.

“Last year, it really tipped the scales,” Wiley says. “We were iffy on whether or not I was ready to go to the big stage that is the Runoffs, especially at a track like Indy where we had no experience there.

“My first experience at the Runoffs was definitely unique, and it was mind blowing at how many people were there,” he explains. “I was truly grateful to Mazda for so many reasons – namely, the ability to go. Then there were all the support guys, and we needed a bunch of parts. We might not have made some of the qualifying sessions if we didn’t get the parts we needed. Also, the race is just so competitive; I mean, all the tough people we drove with all year were collected there and everyone was at the peak of their game.”

The 2021 Runoffs at Indianapolis Motor Speedway was a worthy trip for Wiley, who qualified 18th but drove all the way to fifth in the race in his X-Factor Racing Mazda Miata, utilizing G-Loc Brakes and, of course, Hoosier Tires. For Wiley, that built some confidence coming into the 2022 season, and confidence also helped with topping the FGMC Super Tour points. But this year’s success didn’t come easy.

“It feels great to be the outright winner [of the FGMC],” he says. “I mean, last year, Preston just was solid all year. I can’t think of a mistake he made all year long. Whereas this year, Connor Zilisch and Chuck Mactutus were there all season. I could hardly catch up to Chuck. Luckily, it all came together at Road America this year, and Connor was just trailing ever so slightly behind – [he was] really fast and solid every race we had together.”

The 18-year-old is refining his abilities and his race craft in Spec Miata – building racing skills that are transferrable anywhere. For Wiley, that includes his effort in the IMSA Porsche Carrera Cup North America, another highly competitive single-make series.

“Spec Miata has helped me form almost all of my base skills that I have now, especially race craft-based skills,” Wiley says. “That has really helped me keep my nose clean for the most part in Carrera Cup. I would – and do – definitely recommend Spec Miata to all other drivers, new or not, because racing with these guys who have been doing it for so long is truly the best way to get a ton of race experience quickly.

“It’s like a chess match, because everyone is thinking corners, even laps, ahead to where they want to be. So it really builds race craft and knowledge quicker than almost anything else.”

This year’s Runoffs is going to provide an additional challenge for Wiley, as he will need to battle in the final doubleheader for the Carrera Cup at Road Atlanta during the same Sept. 26-Oct. 2 race week as the 2022 Runoffs. The current plan is to qualify at VIR on the Tuesday, then rush to Road Atlanta for a Wednesday-Thursday-Friday pro doubleheader, standing on his opening day Runoffs qualifying time. Then, it’s a rush back to VIR for Saturday’s race.

“I know that VIR can be tricky to pass if you aren’t playing it strategically and without a draft partner, so we’ll see if I can pick up someone at the front,” he says. “But VIR is really flowing, and it has good compound corners making for a fun track. I think this will be one of the longest trains at a track in quite some time with all these good drivers, [as well as] how VIR drafts.

“I will be very surprised if the front few are able to break away and stay there. But the trick will be qualifying well for sure – hopefully we can be out front on the first day and then be able to deal with wherever we end up when I get back from Petit Le Mans.”

However it turns out, our FGMC Super Tour winner is making the SCCA community proud with his double duty on two of the biggest stages in motorsports. 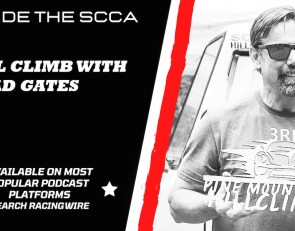 Inside the SCCA, with hillclimber Brad Gates