Alpine Elf Team took a superb second victory of the FIA World Endurance Championship season at Monza, ensuring that Andre Negrao, Matthieu Vaxiviere and Nicolas Lapierre maintain their lead in the Hypercar drivers’ championship heading into the flyaway races to end the season.

In what was easily the most competitive and entertaining race in the short history of the Le Mans Hypercar category, this became a thrilling duel between Toyota Gazoo Racing and Alpine in the second half of the race. There were multiple lengthy tussles on track between the Alpine and GR010 HYBRIDS, the A480 quicker through the corners but significantly slower down the straights than Japanese-entered machines. This made for some excellent, hard-fought racing, both teams pushing their cars to the limit.

Unfortunately, the battle for the win didn’t last until the very end of the race, due to contact between the No. 7 Toyota and the Alpine with Vaxiviere at the wheel.

After Vaxiviere spent multiple laps battling hard with Ryo Hirakawa to take second in the fifth hour of the race off the No. 8, his attention shifted to the No. 7 with Kamui Kobayashi at the wheel. The pair eventually ran side-by-side down the pit straight, and made contact when Kobayashi made a misjudgment, thinking he was ahead on the outside, moving inside gradually to take the defensive line. Vaxiviere’s left-front corner made contact with the rear right of the Toyota, causing a blowout that forced Kobayashi in for a rear-end change. Alpine was lucky that its A480 got away unscathed.

The No. 7 would eventually be penalized for the incident, although TGR vice-chairman Kazuki Nakajima disagreed with the call.

“I think Kamui did nothing wrong. He left enough space,” he told WEC TV.

Nevertheless, it was Alpine’s day and on ultimate pace in the race, the French team had the upper hand. Vaxiviere brought the car home, 2.7 seconds clear of the chasing No. 8 Toyota, which lost ground in the title race and remains second.

“After a difficult Le Mans, it was great for us to bounce back and good for the championship. Next is Fuji — we will have to beat Toyota then,” said Vaxiviere after the race.

The clash between the Alpine and No. 7 effectively decided the race for the win with an hour to go, but that moment didn’t tell the whole story, as Alpine didn’t seem like a potential race winner in the first half of the race.

On this occasion it looked like Glickenhaus’ race to lose early on, as the pole-sitting American-flagged 007 LMH had the pace to pull away from the field and cruise to the finish. Romain Dumas started the race, held his ground and created a healthy margin. But the team’s chances unraveled fast at the halfway mark when the safety car came out for a huge accident for the GTE-Am championship and race-leading TF Sport Aston Martin. (More on this later…)

The caution period ended up costing the Glickenhaus its lead during the flurry of pit stops. The team was then handed a drive-through for speeding during a caution period, which at the time looked like it meant the team would need to stage a fightback in the second half to retake the lead and win its first FIA WEC race. Shortly after serving the penalty though, the race ended abruptly for Glickenhaus with a turbo failure that forced the team to retire the car.

Will this be the last we see of Glickenhaus in Le Mans Hypercar? It’s not yet clear, but after such a promising run at Le Mans yet again in June and a show of pace at Monza, the team would be sorely missed next season by the fans and paddock alike should it walk away. RACER understands that Glickenhaus will miss the races at Fuji and Bahrain this season. Next year there is still a chance we will see the team back, although it’s up in the air — no program is yet confirmed.

“I don’t want to be the guy who says, ‘Yeah we will be back,’ because I don’t know,” Jim Glickenhaus said. “We spend a disproportionate amount of money on racing. We have shareholders, so we have to raise capital. I am optimistic about raising capital, but we have to be careful with the amount we spend.”

What of Peugeot? The French giant, in its debut FIA WEC weekend enjoyed plenty of mileage and flashes of pace in practice, but in the race, it hit home just how much work is left to be done before the team has a chance at strong results. Neither 9X8 showed pace in the race, or stayed reliable.

The No. 93 retired with electrical issues that caused the car to stop out on track multiple times. The No. 94 didn’t fare much better, finishing 23 laps down after power steering issues. It did cross the line, however, and that should be considered an achievement while this program is in its embryonic stage.

It is of course a huge boost to the FIA WEC for the team to be active before 2023, and going racing before the end of the season instead of testing behind closed doors looks to be a good move as so much can be learned from putting a car through its paces in a competitive environment. 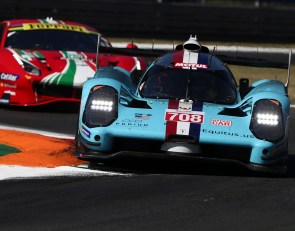